Your Guide to Engine Features and Batteries on Catamarans 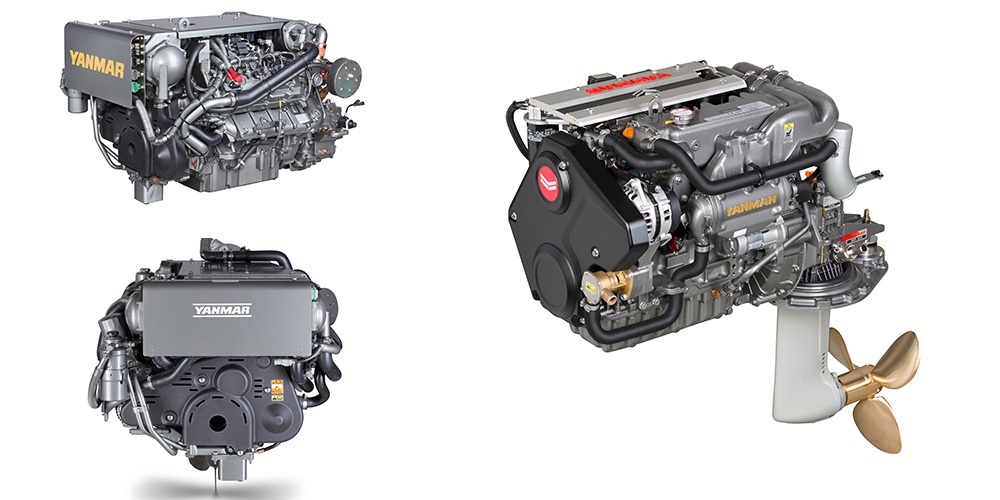 Leopard owners all have different plans and ambitions with their sail or power catamarans. Some take their yachts on extensive travels, others stay closer to shore. The most important part of travelling farther away is being able to get your engines serviced.

All Leopard catamarans are powered by Yanmar engines. Yanmar is the most commonly used marine diesel engine and service is available in >130 countries and territories.

On the Leopard 50 and Leopard 58 we offer the option to upgrade to a larger / more HP engines. On the Leopard 50 one can upgrade from 57HP to 80HP and on the Leopard 58 from 80HP to 110HP. On the latter, the drive changes from a sail-drive to a V drive, as the 110HP engines are not available as a saildrive. The largest saildrive by Yanmar is 80HP, and this is basically the same engine as the 57HP but with a turbo intercooler to get the output to 80HP.

Larger engines allow your catamaran to reach their hull speed at lower rpm’s, so you burn less fuel. However, this comes at a cost as the price for larger engines is higher as well. Once a catamaran reaches hull speed, it reaches the point of diminishing returns: if you push the engine to higher rpms and to go faster, the fuel burn goes up exponentially, and the boat-speed goes up just a little bit. Your yacht also pushes a much larger wake and you see the stern of your Leopard go down. Leopard sailing catamarans have a displacement hull, not a planing hull, otherwise one could hang 2 x 300HP outboard engines on the back and go really fast!

Where are the engines and fuel tanks?

On all Leopard sailing catamarans the engines are located in the aft transoms, separated from the aft cabins by the aft bulkhead. Our engines and saildrives are reverse-mounted, that means the sail drive sits in front of the engine. This does not change anything on the dynamics of the propulsion, however, the advantage is that there is much more space in the aft cabins. The fuel tanks are located in polyethylene (plastic) fuel tanks underneath the bunks. If ever the need arose to remove the tanks, it would be a relatively easy task.  The weight of the engines and tanks is carefully balanced with other equipment on board so that your Leopard will have an even trim.

Differences with the power catamarans

The engines on board the Leopard 43 PC and 51 PC are located underneath the aft beds. Power catamarans are very weight sensitive, and due to the fact that the engines on the 43 PC have an output of 2x320 HP and the 51 PC has 2x 370HP, the transmission to the propeller is through a straight shaft. A straight shaft transmission takes up significantly more space than a ‘saildrive’, hence the location more forward. The insulation of the engine bay, the liner and the engine hatch ensures a very dampened noise level while underway. Sometime we have potential Leopard owners question the ‘engine under bed’ feature, but once we take them out on a sea-trial they realize the low noise level in relation to the all other benefits of the Leopard power catamarans.

Do I need bow thrusters?

Leopard offers the optional bow thruster only on our flagship, the Leopard 58. On smaller Leopards there is simply no need for it: with engines that are 20 or more feet apart, and a bit of practice, you can dock a Leopard quite easily. The Leopard 58 is a large yacht with quite a bit of windage / surface, and it could be difficult to push the bow of by hand, hence the bow thruster option.

Are electrical engines an option?

The first production catamarans with electrical engines were launched 15 years ago, and the fact that no production builder is currently using electric drives is a statement that the available technology is not ready for marine applications. Robertson and Caine / Leopard builds catamarans that are easy to service anywhere in the world, and (as of now) complicated electrical drives and recharging systems would not fit this demand. However, Leopard is keen on less fossil fuel usage and solar panels can be fitted on any model Leopard Catamaran.

Should I upgrade to AGM batteries?

Lead Acid are the standard type batteries offered on Leopard catamarans, but most Leopard buyers opt for the upgraded AGM batteries. AGM stands for Absorbent Glass Mat battery. They were originally developed for military aircraft and power, weight, safety, and reliability were paramount considerations. The main advantage of AGM batteries is the fact that they hardly require maintenance, and if properly used / recharged, they can last a long time.  As of 2019, Leopard offers Lithium batteries as an option on the Leopard 50. Lithium batteries are the next step in battery efficiency. They are light weight, and they can be discharged much more than Lead acid and AGM batteries. However, this comes at a cost: Lithium batteries are expensive.

Will I be able to run my air conditioning off of batteries?

At present, this is not possible on our catamarans. However, Robertson and Caine & Leopard Catamarans are currently designing a system which would allow a Leopard 50 owner with Lithium batteries and an additional inverter to run one a/c handler and the chiller system off of the Lithium batteries. As technology advances, we expect to offer this on other models as well.

At Leopard Catamarans we believe in tried and tested systems. The technology found on Leopard catamarans can be easily serviced and maintained with common knowledge of systems.  Leopard Owner Manuals contain a litany of information and ‘how to’ sections and are widely regarded as the best manuals among production catamaran builders. If your Owner Manual does not answer your questions, Leopard has an experienced and qualified Technical Department on stand-by to support you with anything you made need as a Leopard Catamaran Owner.

Peter is a valued member of the Leopard Catamarans team since 2002, he's an avid sailor & adventurer who speaks multiple languages and has sailed the seven seas
peterw@leopardcatamarans.com