Two-Time Owner Sails a Leopard 50 for the First Time 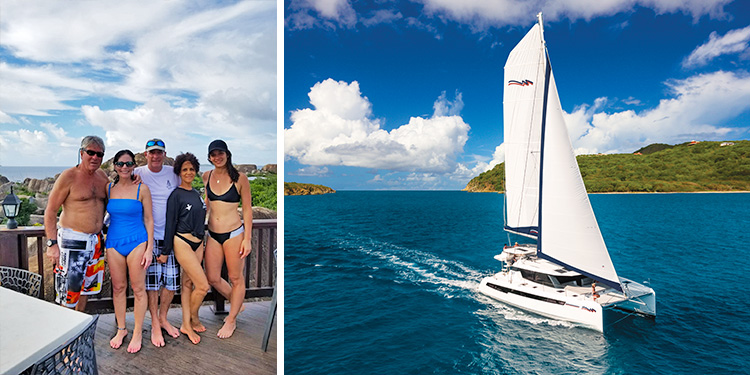 The Leopard 48 was a catamaran unlike any other. The award-winning yacht was popular with nearly every type of cruiser out there. Many people wondered if this sailing catamaran was  even replaceable. What we learned at the 2018 Miami International Boat Show was that the new Leopard 50, created to replace the Leopard 48, was in a class all of her own. Building from the most successful features of the Leopard 48 and adding in new features from the award-winning Leopard 45, all while giving the yacht a completely new look, made the launch of the Leopard 50 a huge success.

Taking into consideration the integrity of the Leopard Brand, the first few hulls of the Leopard 50 were purchased after viewing computer renderings, having never seen the boat in person. One of those owners, who previously owned a Leopard 48, just recently had the opportunity to sail on a Leopard 50 (Moorings 5000) in the BVI for the first time. And while the yacht he was chartering was not on his own (his has not been handed over yet), after spending a week aboard a Leopard 50 in the BVI, he revealed to us that he could not be more pleased with his decision to purchase a Leopard 50.

Read his full review below:

"We had a wonderful week chartering the new Leopard 50/ Moorings 5000 in the BVI last week. As a previous owner of a Leopard 48 for 5 years and a future owner of a new Leopard 50, I had great expectations for the new catamaran. The sea trial of one full week living on board and sailing in perfect conditions in the BVI has really given me the answers to all my questions and concerns.

I bought the new Leopard 50 based solely off of computer renderings of the boat. I had full faith that Robertson and Cane would come out with a superior yacht that progressed with the evolution in design, elegance, and performance that was developed during the last decade. Today I can tell you that I am extremely pleased and excited because the new Leopard 50 met and exceeded all my expectations.

The exceptional galley is contemporary, roomy, and has plenty of storage. The electric grill in the aft cockpit, the salon with incredible visibility, the modern interior design and general layout are impeccable.  The easy access to the forward cockpit with great ventilation through the front door, the giant half cockpit, and even the lighting provide perfect ambiance at night. The beds, almost King-size, provide easy access and comfort, making living on board a dream. I can go on and on describing all the conveniences and features on board.

The yacht has modern lines and looks beautiful. Every time we arrived at a mooring field, we attracted a lot of attention from other boaters. When motoring with the 57 HP engine in light wind at 2500 rpm, our speed was 8.5 Knots which is faster than the Leopard 48 with the same engine. This hull cuts through the waves very smoothly and pounding was reduced significantly compared to her predecessor.

The most important aspect for me is the sailing ability. I was very impressed with the general performances of this yacht. We had 15 to 20 knots of wind every single day of our charter and sailed approximately 25 nautical miles every day. I was operating the boat alone without assistance from any of the crew members and I can report that it was very easy to operate all of the maneuvers by myself. The helm station is fantastic and very well designed. The third electric winch to operate the main sail is a blessing. I could sail upwind at 32 degrees from the apparent wind maintaining very good speed.

In conclusion, I can tell you that I am very aware that I am not buying a Gunboat or Outremer, and this is fine with me. Also, I am not buying a condo on the water. I am very happy that I will be the owner of a yacht that is a beautiful luxury cruising catamaran with sailing performances that will keep a smile on my face.