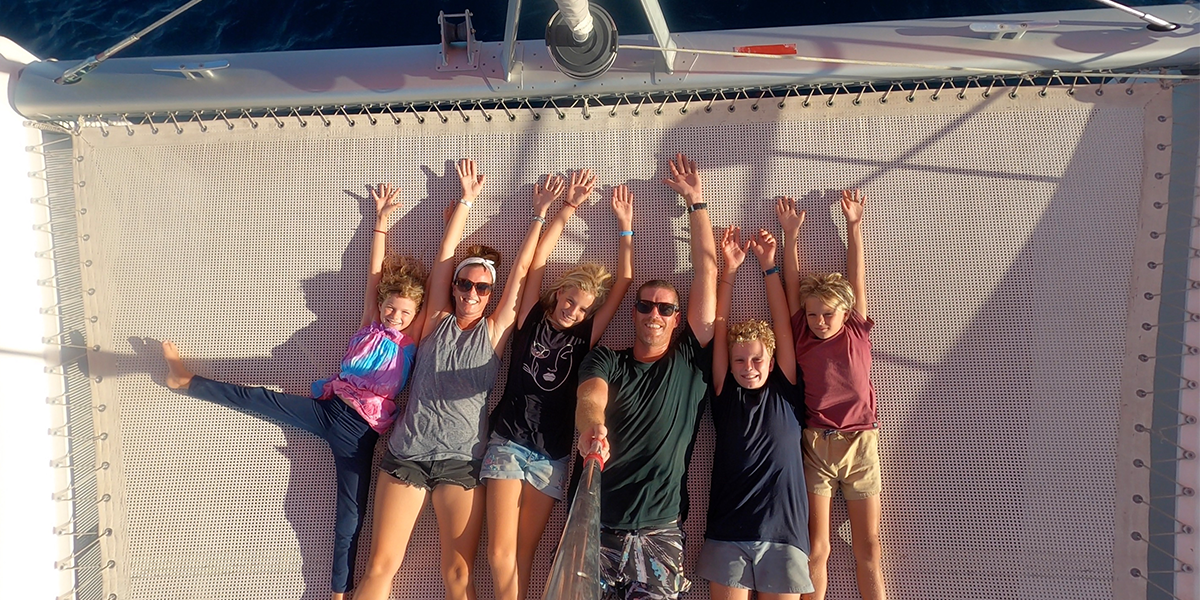 Happy days are here again! Unless you are a member of the Fothergill family, of course, then happy days have always been here for this family of six. Or at least since 2017 when they decided to cast the lines on their conventional(ish) lifestyle and opted for something more fulfilling.

The Australia-based clan of six moved aboard their 51 ft. Dufour (monohull) in early 2019, when they pushed off the eastern coats en route for New Caledonia. "We pushed off for the South Pacific, and our first ocean passage took us seven days," Kris continues, "From New Caledonia, we went on to Vanuatu and then south to New Zealand, and that was a good country to be in when the pandemic happened. From there, we spent a better part of eight months in Fiji up until April 2021." 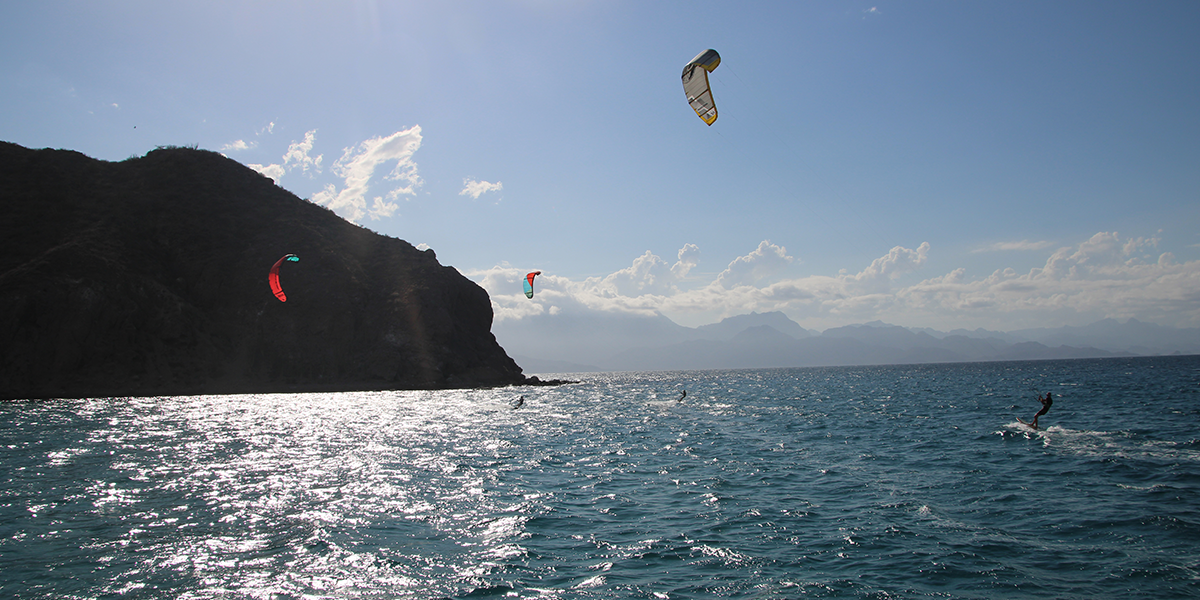 At this time, Kris and his wife, Shona, decided to sell their monohull. While in Fiji, they hopped on the Leopard Owner's Group on Facebook and posted that they were ISO of Leopard 46. And why did they decide to switch to a catamaran? Kris explains, "The main catalyst for switching over to a cat was that we needed to get a bigger tender. The kids keep getting bigger, and our oldest just turned 12, so we thought a bit more space and a bit of privacy would be good." 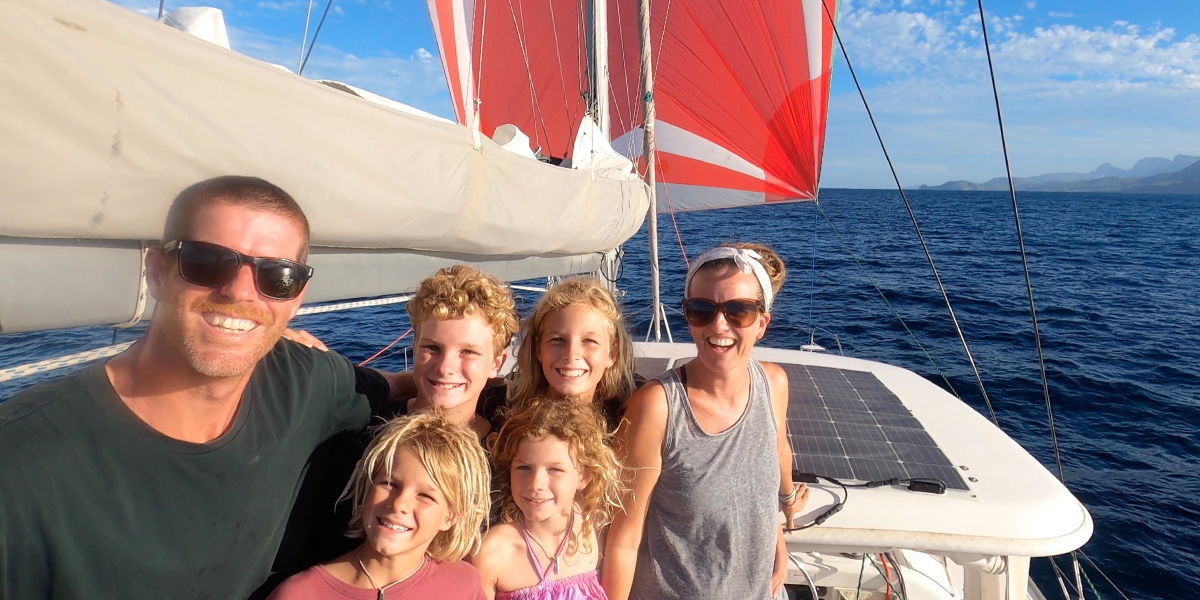 When a Leopard 46 turned up in Puerto Penasco, Kris and Shona hired someone to survey the boat. "It was a risky call buying boat halfway around the world, sight unseen. We had a bit of an idea what to look for-- what would be a deal-breaker and what could be addressed," Kris continues, "It was the design we were after; it didn't matter where in the world the boat was located."

Twenty-seven pieces of luggage (including eight surfboards, four kiteboards, eight kites, three ukuleles and a skateboard) and five countries later, the family found themselves in Mexico on the Sea of Cortés. 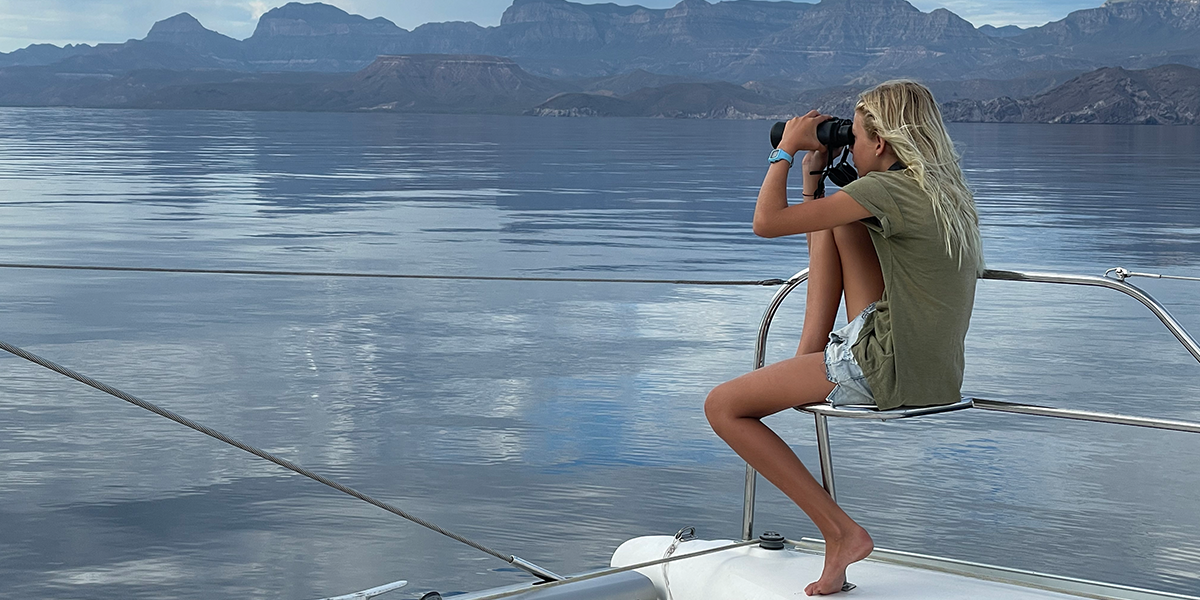 How do they do it?

Families who chose the cruising lifestyle know that in the beginning, they sacrifice a lot because once you get out there cruising the world, every moment it took to get there was worth it. Kris still works remotely from the boat, and the kids were home-schooled on land, so there wasn't much of a learning curve from that aspect.

One thing that Kris made clear was how grateful he is for the type of life that he can provide for his family. "We don't it take for granted by any stretch of the imagination. We feel blessed to be able to do what we do and to live where we are." Kris continues, "The reason that we have an Instagram and the reason we have a YouTube channel is not to glorify what we're doing. But rather, if we can encourage or empower families to think outside of the box so they can get out there and pursue whatever it is that's important to them. Not just sailing, but anything. And that's what we're on social media to do— inspire and encourage others." 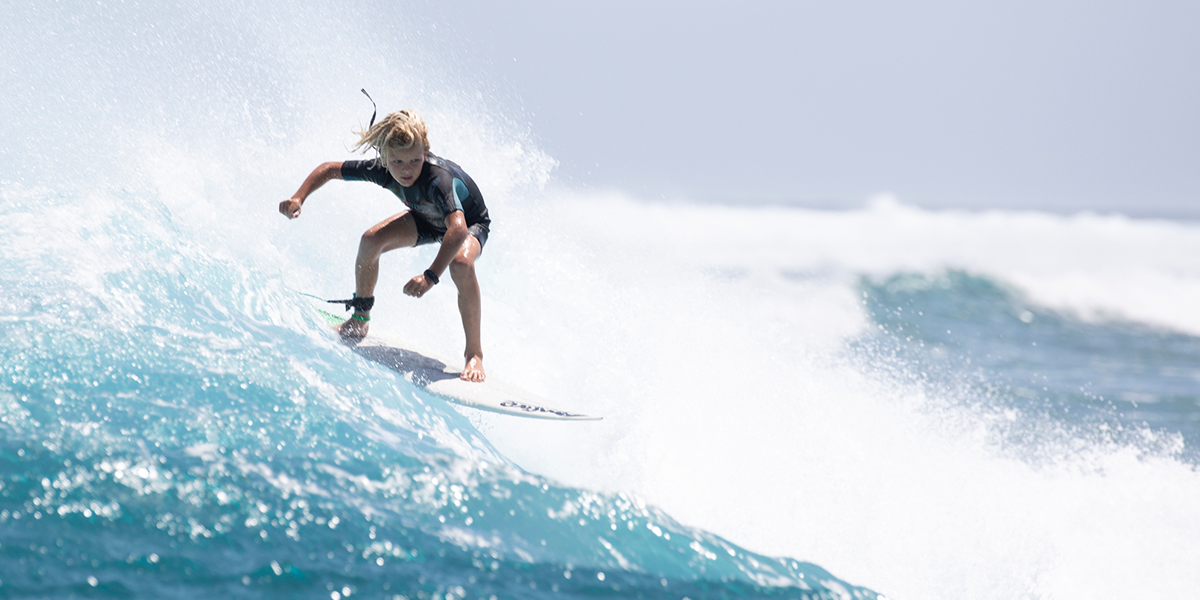 Keeping worldly possessions to a minimum

Certainly, living onboard a boat, even a catamaran, can start to feel claustrophobic, even for the closest of families. So, what is the key to happiness? "Less is more,'" Kris starts without hesitation. "We just had itchy feet and were keen to mix things up and perhaps challenge a few social norms at the same time. We subscribed to minimalist thinking a long time ago. We gave away a whole lot of stuff, sold some of it, and for the most part, binned the rest." And from there? The family downsized to a two-bedroom apartment before moving onboard for full-time cruising. 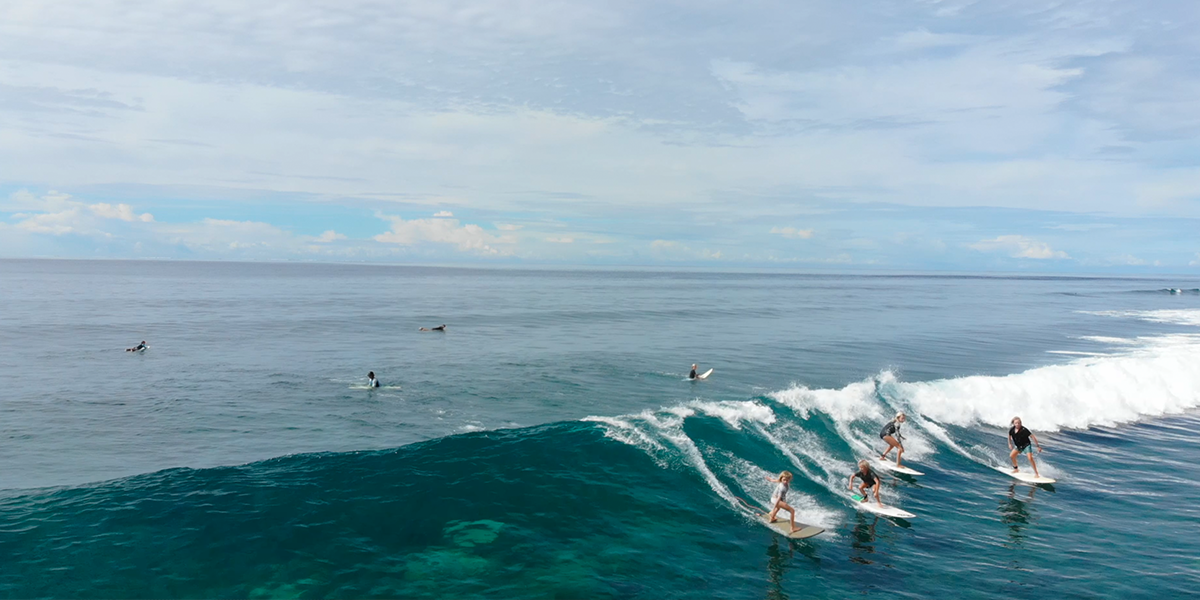 Bella (12), Finn (10), Archie (8) and Pippi (5), all pictured on the wave above, are sea-faring sailors in their own right. Collectively, it seems that they are all active surfers who are heavy into kiting. Finn enjoys fishing for the family while Bella is the resident DJ on the Ukulele. In fact, she intends to create a Ukulele album in the near future. Finn plans on earning his stripes at sea so he can be ‘on watch’ by himself. He also wants to achieve a front roll on the kite. Archie wants to do a big jump on the kite and a nice turn on a wave while surfing. Pippi is still working at kitesurfing, and she hopes to soon be standing up and riding the kiteboard. When it comes to surfing, she wants to learn diving and turns.

Dad, Kris, does anything with a bit of adventure, which usually involves riding a board of some description. He has shown each of the kids to surf and is now teaching the family to kitesurf, with some of the kids now showing him up! Mom, Shona, has also taken up surfing and kiting. It seems the apples didn't fall far from the tree! 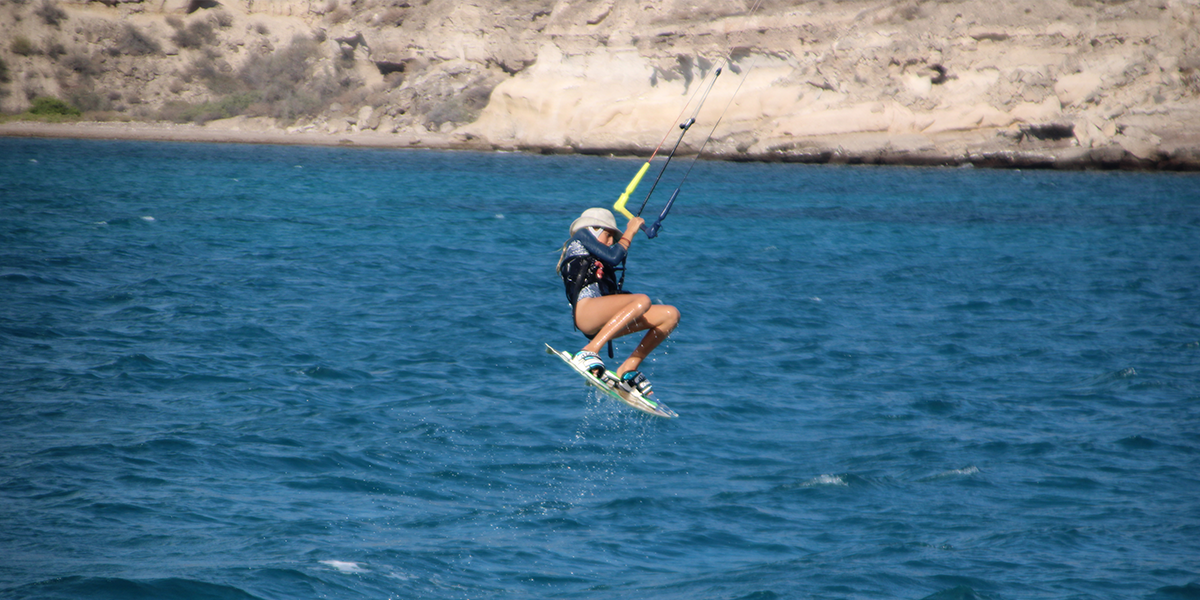 Aside from being natural-born water sports fanatics, another thing that the whole family has in common is that they absolutely love their lifestyle, and it seems they wouldn't trade it for anything. Kris explains, "After 2020, we were discussing different resolutions we had as a family, and we suggested heading back to land, and it was a resounding 'No!, we're not ready. There is so much more to do and see, and we aren't ready for land just yet.' And those were the kid's words. We decided that a catamaran had more of what we needed. And it was a bonus that the boat was in Mexico. This part of the world has a lot fewer travel restrictions."

Being a kid on a boat certainly has its advantages, and  Bella (12) was kind enough to disclose some of those with me. Bella shares, "Living on a boat gives us the ability to participate in all kinds of different water sports. I love to surf and kiteboard when the weather is right. I also enjoy freediving."

When asked about sharing advice for kids who are about to move onboard a boat, Bella reveals, "Leaving land life wasn't very difficult. Living on a boat allows us to explore new places and make new friends along the way. Another perk is that we don't have to do school at proper times. Generally, we kite and surf when the weather is nice, and when it's rainy or not great weather, we'll do extra school. So that is really nice!"

The family is currently heading south down the west coast of Central America en route for Costa Rica, where they are sure to quench their thirst for waves. Costa Rica surf is some seriously epic stuff!

And once they are done with Costa Rica? They aren't yet sure if they will head east through the Panama Canal or head west for the South Pacific. And that's the magic of this lifestyle-- they'll decide when they're ready.