From Fighting Fires to Flying Jibs: Soulmates Set Sail on a Leopard 45 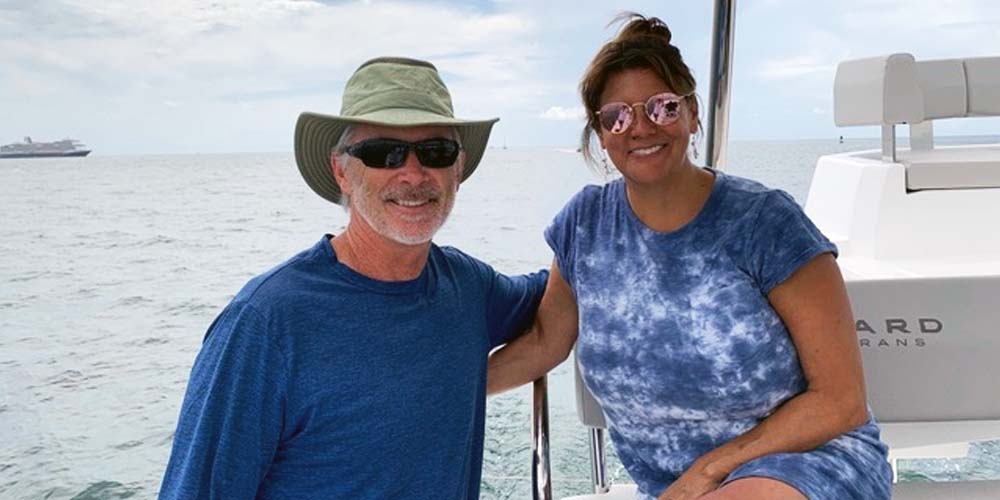 It is said that when you finally meet your soulmate, they will bring on a feeling of complete euphoria. The part of your brain that's associated with addiction lights up because falling in love releases dopamine, the hormone responsible for reward.

In turn, you'll only see the good things about your soulmate, while any of the less-than-shiny stuff will take longer to become apparent. This can be said to be true for both your lifetime partner, as well as your boat.

Meet Paul and Teresa, Soulmates in love and for life. It only makes sense that they would name their Leopard 45 “Soulmate”. To someone on the outside, a boat may not have a soul, but when you have poured your heart into making your dream of living aboard a reality, that touches your soul.

Paul shares, “Both of my uncles owned sailboats and they used to take me to Catalina for about a month in the summer. Then, when I was 27 my intentions were to buy a boat and live in Dana Point, CA. But when I met Teresa and got married, priorities changed.”

Paul was working as a firefighter when the two got married. They spent their honeymoon on a 35 ft. monohull in the BVI, and they were still able to get their sailing fix occasionally, doing various yacht charters with The Moorings every so often. It was when Leopard released the 45 that all bets were off, their dream boat was born. 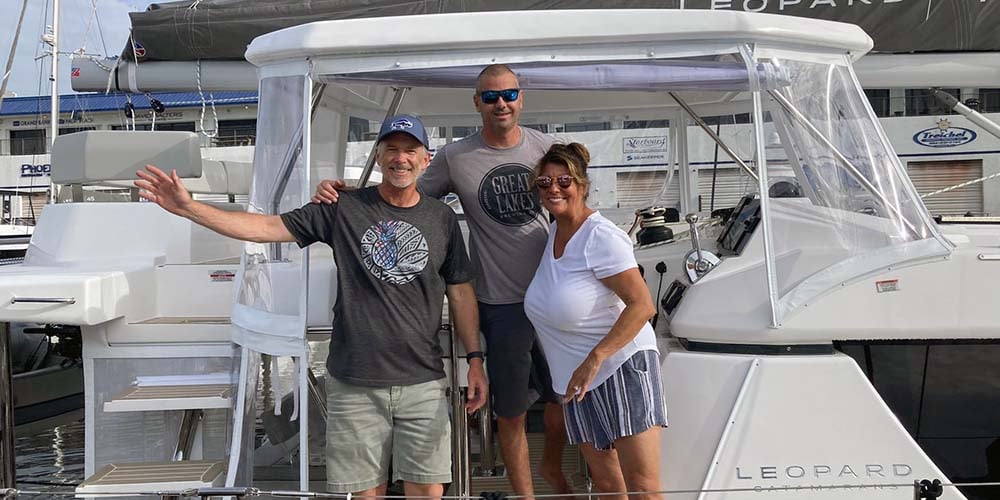 The art of patience

Teresa had revealed to me that when Paul discovered the Leopard 45, he had set an image on his phone and computer screen saver. Paul confesses, “Tom Dove came out with a really nice article in SAIL Magazine about the Leopard 45 and we decided that we were going to test drive the boat with The Moorings on a charter for a week. I had added the image to my screen savers to keep the dream alive.”

After the couple spent a week in the beautiful BVI, they couldn’t shake the idea of getting back there, only this time, it would be on their own boat. “One day Teresa looked at me and said, ‘Just buy the boat already!’ Her only condition was that the boat needed to be new,” Paul explains. He had no trouble obliging to this request.

Paul summed up their desire to go sailing with a quote by esteemed sailor and author, Cap'n Fatty Goodlander. “What keeps people young? Intellectual excitement and new challenges. A small boat on a large ocean will give you both.” Paul explains, “You have got to stay stimulated in life. And with this, there's so much to learn. It's so new and different. It's just overwhelming, but in a good and exciting way.” 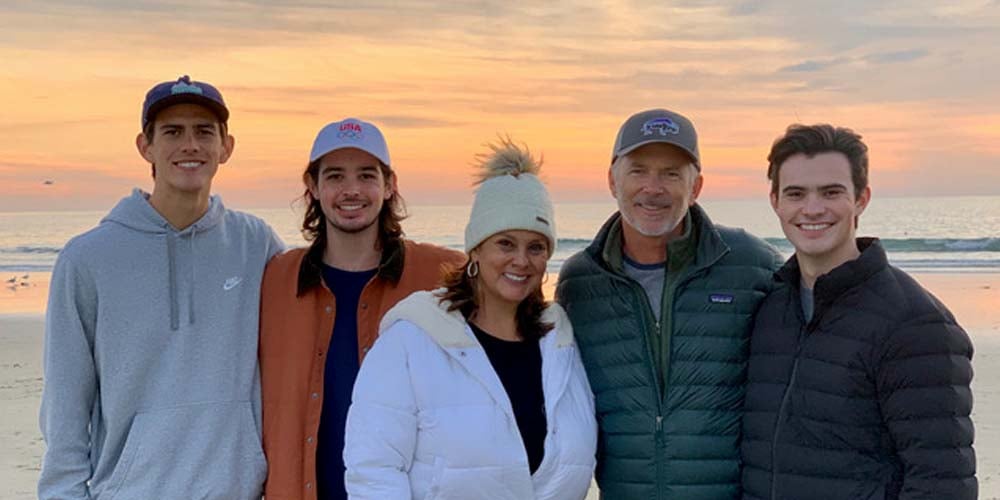 Learning and growing together in every step of life

Full-time cruising isn’t for every couple. But it is for couples like Paul and Teresa. The dynamic duo has worked as a team to raise a family in the hustle and bustle of Los Angeles, with Paul being an LAFD Firefighter for the last 30 years. Now they are ready for some peace at sea, all while learning the joys and growing pains of living on a sailboat.

The couple was warned by friends that going from a large two-story house to a 45 ft. sailboat was crazy. But that doesn’t faze them, they are thrilled to be spending the time together, free from the distractions of big city life. Teresa confesses, “Our friends just didn’t think we would really do it, but now they are proud of me, I’m proud of me. This is a new chapter in our lives, and we are doing exactly what we want to be doing.” Paul adds, “It is crazy. You can’t compare it to anything. Unless you’ve lived on a boat, it’s going to take a while of getting used to. We are ready for the new challenges.”

While still Californians at heart, the couple has traded in their flip flops for bare feet and they can’t get enough! “What has been super rewarding for me was the fact that we've already gone over 500 miles in this boat. And it seems like you're coming in the way everybody would want to. It’s just so it's so different and so awesome. 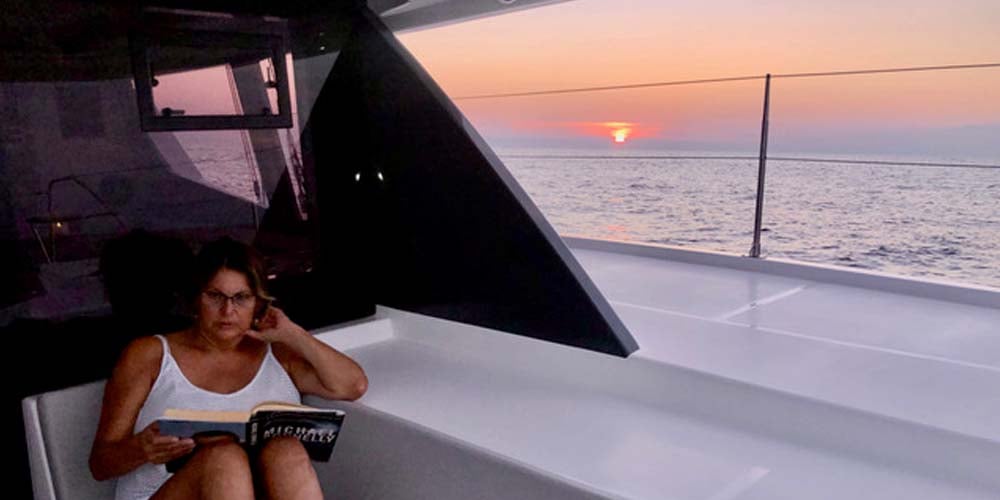 Happy hour with a view

Having had the pleasure of spending a week aboard “Soulmate” with Paul and Teresa, I was lucky enough to enjoy some of the first of their many sundowners, in addition to many fiery sunsets from the upper lounge area. Paul on his guitar, rum in our cups, we had no complaints. “I am so glad we have the upper lounge, in fact, I fell asleep up there last night,” Paul reveals. Teresa explains, “The first day that we sat up there and we're sailing along with the sunset, it was really, really nice. We were not sure we needed the upper lounge at first but now we really appreciate it.”

But it wasn't the upper lounge that was the selling point for Paul and Teresa. It was a multitude of features that encompassed everything that they were looking for, the upper lounge was just the bow on top. As Paul explains, "The Leopard 45 was our goldilocks. We knew we wanted a Leopard and this size was perfect for us, not too big and not too small." He speaks from experience, having done some west coast catamaran sailing on a Leopard 40.

Deciding on a vessel was a cinch compared to the pressure of picking the perfect boat name! After going back and forth up until delivery, a day at a winey sipping on a bottle of wine, which happened to be called Soulmate, and the rest was history.

If you could do it all over again

"If I could go back I would have gotten more speakers everywhere!" Paul says. But in a more serious tone, he continues, "Do your research, know what it is that you want, and seek advice from others who have already been here," Teresa continues, "Other owners have so many good ideas and we are still learning so much about what works best. It is really helpful to see what other people have done. What has also been really helpful is to have a captain with us to teach us the ropes. I would definitely recommend that. Paul has experience sailing but having someone help us get acclimated has been great."

Final thoughts? Paul has one, "If you want to do it, you need to do it. I know that if I didn't do this, I would regret it forever," He continues, "And get more speakers for music!" 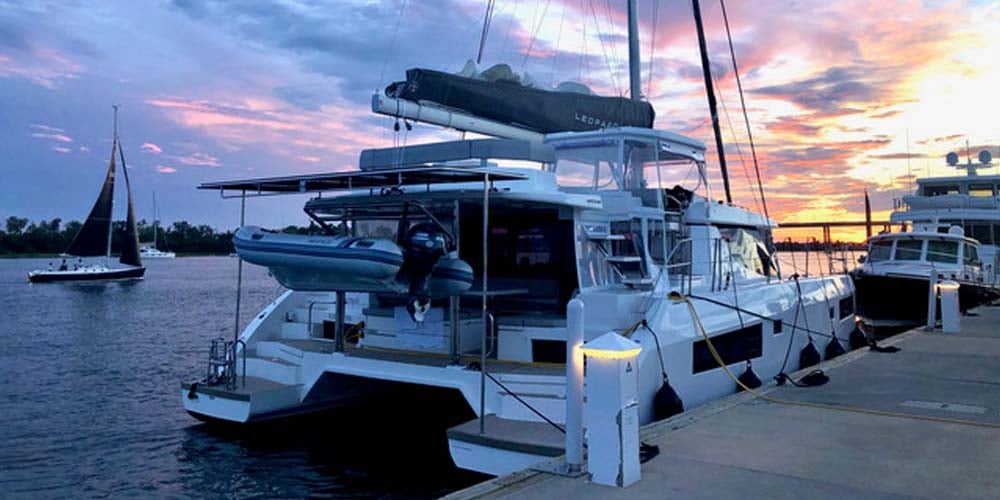 A lot to look forward to 😎

Paul and Teresa can't wait to have their friends and family visit so they can show them what sailing life is all about. "We can't wait to show them things that other people haven't seen. We want to spend time with our family in BVI and we look forward to discovering plenty of tropical beaches. It's the next chapter in our lives and we are doing exactly what we want to do," Teresa confirms.

In true Paul and Teresa fashion, we concluded our interview in song. 🎵 "I'm looking for a good time. Good times never felt so good, SAIL ON!"🎵