Blog > Setting Sail for an Early Retirement at Sea

Setting Sail for an Early Retirement at Sea 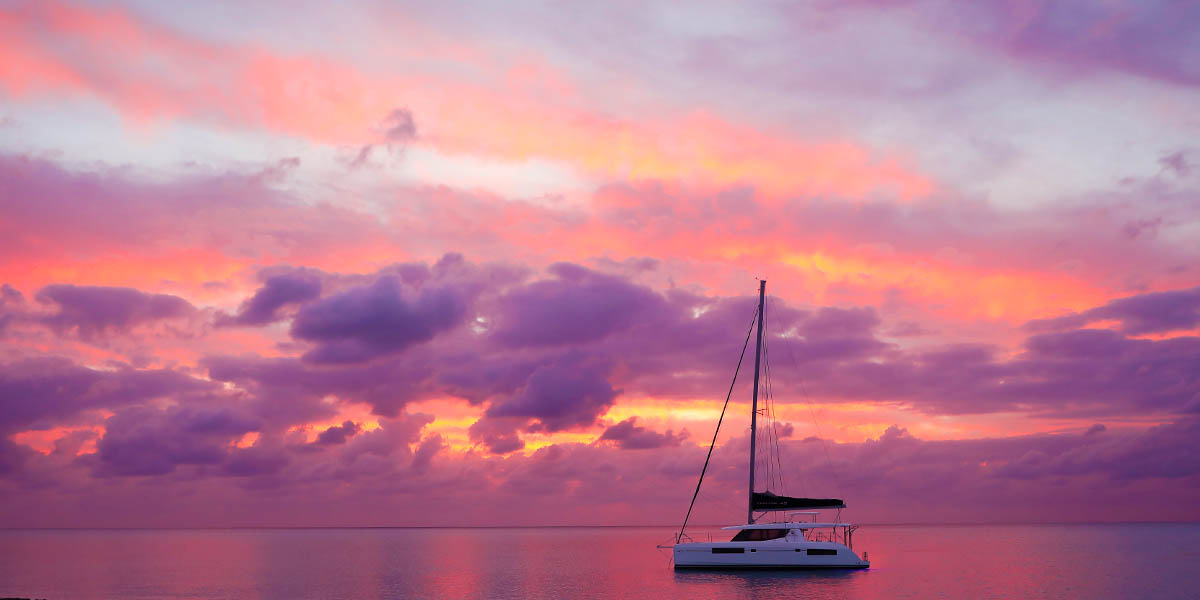 Bob and Melinda Curtis are counting stars. They’re also counting down the five years until Bob can retire early at the age of 55, when the couple can explore vast blue waters on their Leopard 45. Both he and Melinda have worked for many years for a big-name tech company, and look forward to calling sailing their new career.

For Bob and Melinda, the decision to retire at full-sail came quickly. About six years ago, some friends who had recently purchased a catamaran invited the couple on a trip. Neither Bob nor Melinda had spent much time sailing, but the catamaran experience set their imaginations ablaze.

“We had three conversations about making our retirement look like [the sailing trip]. One was actually on the boat, and the other two were shortly after that,” says Melinda.

The couple quickly put together a plan to make their newfound nautical dream come true.

They wanted to downsize and learn as much as they could before officially setting sail. Over the last five years, the Seattle-based couple has gone from a 4,800-square-foot home to a 650-square foot efficiency apartment, with a couple of other step-downs in between. They wanted life on their Leopard 45 to be as streamlined as possible. 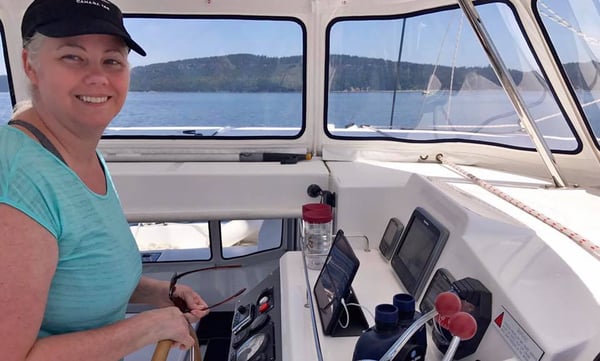 For their education on sailing and, specifically, catamarans, Bob and Melinda began taking courses online, chartering, taking lessons from instructors and doing more sailing with friends. And they also followed everyone’s advice to get experience around the different types of catamaran manufacturers and the different learning styles from different instructors.

The two also attended a handful of boat shows. Perhaps the most meaningful exposure to the sailing community came through the Leopard Catamaran owners' parties, where they were able to talk to current prospective owners. Then, they became connected to the Leopard community via Facebook.  Bob and Melinda found Leopard owners incredibly supportive and quickly felt connected to the group. 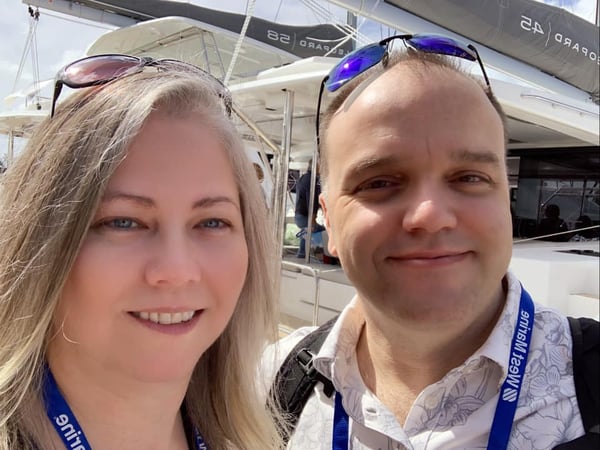 These experiences gave Bob and Melinda the confidence to embark on a two-week, 800-nautical-mile circumnavigation of Vancouver Island on a 48-foot Leopard catamaran with an instructor. They used that trip to get their offshore certifications.

“We felt like, ‘Yes, this is something we can do.’ At that point, we got in a queue with Leopard to go ahead and make the purchase. Again, we felt like, ‘Yes, we could wait, but we'd be missing out on experiences and opportunities over these next five years,’” says Bob. 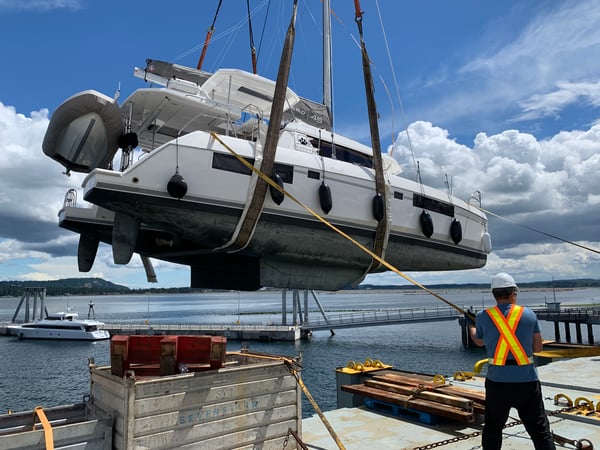 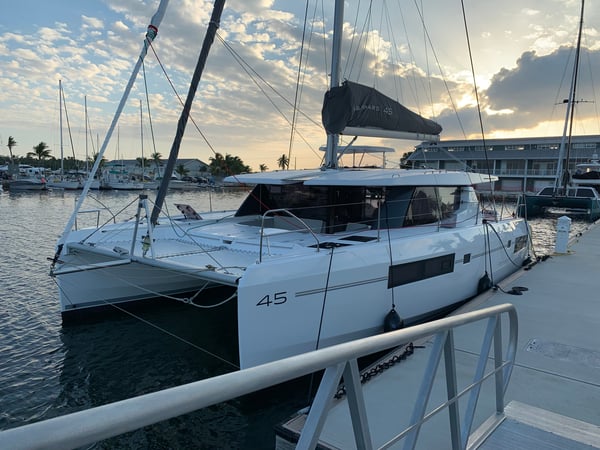 There are many reasons why Bob and Melinda chose a Leopard. They appreciate the styling, functionality, maintenance accessibility, quality, and safety. The established, helpful and genuine community (online and in-person) of Leopard owners is another unique advantage.

Melinda and Bob’s Leopard is moored in Bremerton Marina on Puget Sound, about a 60-minute ferry ride from Seattle. The couple is slowly making their way from that efficiency apartment to living on their Leopard full-time. They plan to complete the transition by November of this year.

“Spending as much time as we can aboard, and ultimately living full-time on our Leopard, is about becoming familiar with every component. When you're out at sea in distant locations, you are completely responsible for taking care of the boat. We're trying to take advantage of this time for even more learning opportunities, so we are prepared for any type of scenario that may happen, whether it's weather issues or simply the fundamentals of our Leopard. We want to understand the ins-and-outs of every component on it,” says Melinda.

Their impetus to live a life of sailing (besides that trip with their friends) in five years was really two-fold. First and foremost, the two wanted to have an active lifestyle during their retirement.

“We feel as though the boat and the work on the boat and sailing are going to fulfill that need on pretty much a daily basis,” says Bob.

The other component is the Bob and Melinda’s shared desire to travel and learn about new cultures. 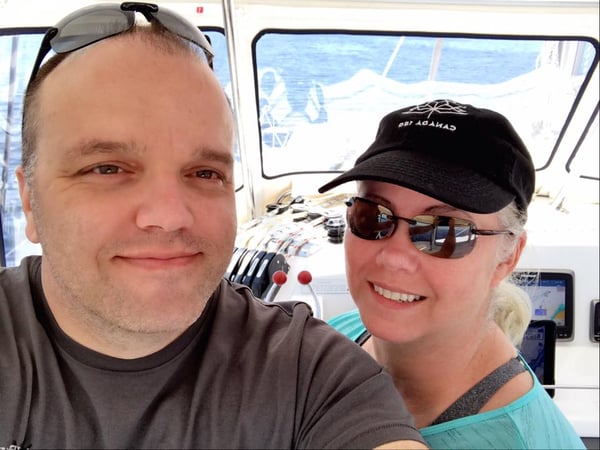 “All of our sail plans take exploration into consideration – unchartered territory, experiencing things hands-on, learning and meeting new people. These are things that we can do today in the Pacific Northwest,” say Melinda.

And, once retirement rolls around, they’ll have even more opportunities to do exactly that.

During their post-career years, Bob and Melinda want to sail across the Pacific. If that doesn’t work out, they have back-up plans to sail through the Panama Canal and spend time exploring the Caribbean and the East Coast of the US and Canada.

But in the Pacific Northwest, there is still plenty to see and explore. Bob and Melinda have further plans to head up to Alaska and sail around Vancouver Island again.

For these two, life is good, and it’s only going to get better.