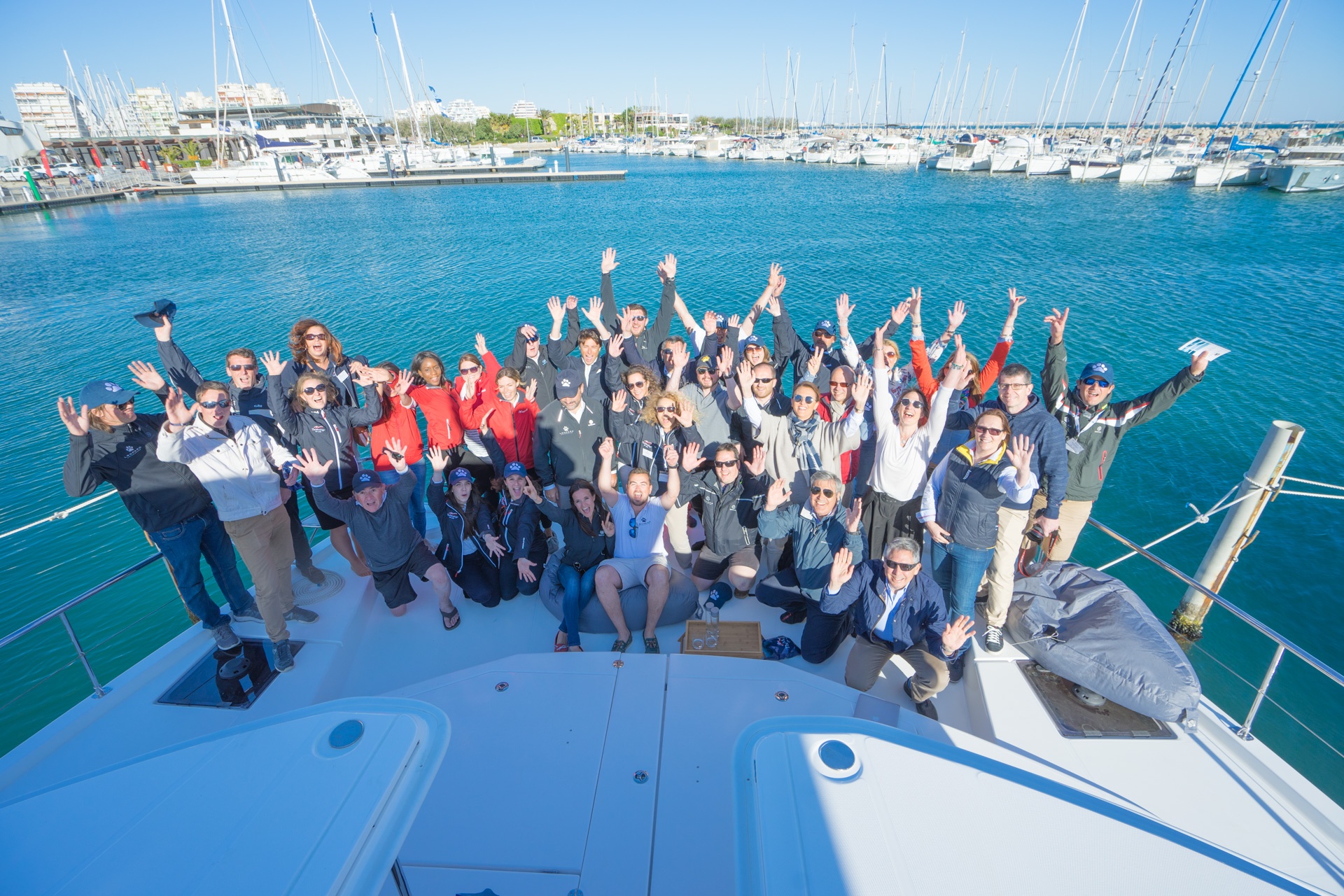 From the launch of the Leopard 45 to selling more yachts than ever before—it has been a successful year! So it comes as no surprise that Leopard Catamarans had a RECORD BREAKING season of boat shows!

We hope that you were able to join us at a show or two, but if you were not we want to relive the memories with you by having a recap of all the exciting events that we participated in throughout the last year.

The show welcomed 630 boats and 191 world premieres and is recognized as an international yachting event. The sparkling bay of Cannes provides and elegant setting for this first-class yacht show.

What better way to kick off the Annapolis Boat Show than with a press conference and a cocktail party on the Leopard 45? We were thrilled to have the opportunity to give the press a first-look of our newest model.

The judging and sea trial for Boat of the Year took place in Annapolis and the judges must have liked what they saw because the Leopard 45 was named the 2017 Boat of the Year.

The Yacht Sales Team got together for our annual dinner and a recap of sales from the previous year. We danced the night away with our friends at The Moorings when they hosted their annual Annapolis party, and we swayed with our friends at Sunsail the following night at their Annapolis Customer Appreciation Party.

We wrapped up the first night of the show by taking the Leopard 43 PC for a sunset cruise around Chesapeake Bay. The rest of the week was steady and we saw quite a bit of foot traffic on our yachts. We are looking forward to coming back to this show again in 2017.

The Ft. Lauderdale Boat Show is truly an international exhibit and the largest in-water boat show in the world. This year at the “Yachting Capital of the World” we proudly displayed the Leopard 51 PC and the Leopard 43 PC. Over at Catamaran Cove at Pier 66 the all-new Leopard 45 was on display for her South Florida Debut.

There is nothing quite like a boat show on the beach and trust us, this show was exactly where you wanted to be!

Being that Pattaya is less than a two hour drive from Bangkok, Pattaya is one of the hottest beach resort destinations in Thailand and the Ocean Marina Pattaya Boat Show is a favorite attractions for Bangkok residents and tourists. This year we stunned guests by displaying the flagship of our powercat fleet, the Leopard 51 PC.

Kit Chotithamaporn, Leopard’s Yacht Sales Manager for Asia explained, “We recently delivered the Leopard 51 PC to the local buyer in Pattaya. There is a lot of potential here and a positive market. There is a good traffic at the show through the day with a number of inquiries and leads.”

Leopard Catamarans had a great display at the Paris Boat Show and we were proud of the success that we had as a result of our participation. Our Vice President of Sales and Product Development, Franck Bauguil, was able to meet with the show organizers and give an exclusive interview about our fleet of catamarans and what to expect from Leopard Catamarans in the future. See the interview here.

It is the world’s largest boat and watersports trade show in the world. And this year, Leopard Catamarans, along with 1,812 other exhibitors, put on an unforgettable show. We had set high expectations for Düsseldorf, and our expectation were fulfilled! Our only regret when leaving the show was that we have to patiently wait an entire year for the next one.

Leopard Catamarans came into Strictly Sail with full force—displaying our entire range of sailing catamarans, along with the flagship of our powercat fleet, the Leopard 51PC.

The Leopard Owner’s Party was an unforgettable evening, and it is something we look forward to every year. The team from Cruising World Magazine were in attendance to formally present us with our Boat of the Year award, and we had the chance for a photo op with Mark Pillsbury, editor of Cruising World Magazine.

The Industry Breakfast, something we look forward to attending in Miami every year, is a an opportunity for  everyone involved in the sailing industry to get together for an exclusive review of the state of the sailing industry and presentation of some of the industry’s most prestigious awards.

We have recently learned that Strictly Sail Miami will be relocated to Miami Marine Stadium Park in 2018. We will see you there next year!

Browse yachts by day, and sip cocktails on South Beach by night! At Yachts Miami Beach you can have it all! With both the Leopard 51PC on display and the Leopard 43PC on display, Leopard Catamarans had the perfect set up! It was a pleasure to have the owners of the Leopard 51PC display model stop by for a visit and a champagne toast to their new yacht, “Runner Duck”.

We enjoyed getting to meet all of the folks interested in a Leopard Catamaran, and we love introducing people to our yachts for the first time. This year’s Yachts Miami Beach provided us with the perfect blend of both.

In the perfect location for views of the beautiful Palm Beach Island and Downtown West Palm Beach, this boat show is certainly one of kind, and in the best way possible. Leopard Catamarans made their Palm Bach Boat Show debut this year with a Leopard 51PC in tow.

We had plenty of positive activity with clients, and we are pleased that we had a great showcase before heading into the summer months.

For the first time ever we attended Asia’s Premier Boat Show, the Singapore Yacht Show, where our Leopard 45 made her debut in Asia. We also had our Leopard 48 on display, along with both the Leopard 43 PC and the Leopard 51 PC.

The Singapore Yacht Show provided a first-class platform for our sales team to meet guests and buyers, and proved to be a successful way for Leopard Catamarans to merge into this market. We are looking forward to displaying here in 2018.

In our most successful European Yacht Show to date, there is a specific reason that we love this show so much, and that is because it is Multihull madness! For an opportunity to see the latest and greatest in the catamaran industry, this is where you need to be!

If you were not able to attend any boat shows this year, fear not because we will be doing it all over again next year, starting with Cannes Yachting Festival, 12- 17 September 2017! To stay in the know on upcoming shows, be sure to like us on Facebook and click the button below to sign up for our e-newsletters!