Blog > Preparing for an Atlantic Crossing

Preparing for an Atlantic Crossing 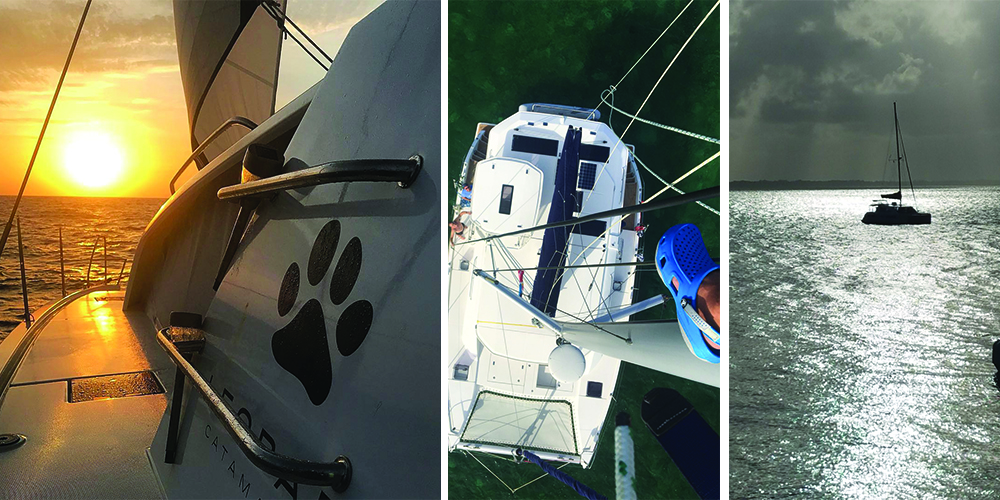 You can never be too prepared. Isn't that the truth? This is especially true when it comes to preparing for a month at sea. How does one properly assemble for this voyage? Preparations and planning is months in the making. Outfitting your yacht, choosing the right crew and provisioning are a few examples of preparations that must be thoroughly thought through.

Well first things first, you need a boat. "The day we decided to quit our jobs, live aboard a boat and cruise around the world, Lori said she would only do it in a catamaran, which I wholeheartedly agreed on-- there was no debate." Sailing couple Jonathan and Lori are the owners of Asteria, a Leopard 40 currently sitting in Bermuda. Tomorrow Jonathan will be on his way across the Atlantic and to the Azores.

This 3,300 nautical mile adventure has been a year and half in the making. Jonathan explains, "I have had the boat for about a year and a half now. We sailed her from Fort Lauderdale to Miami and Key West to make sure everything was working good. Then we went back to Fort Lauderdale for upgrades. We sailed around Florida and up to Annapolis where we spent the summer in the Chesapeake, back to Miami, seven months in the Bahamas, from there we spent time in Cuba and then back to the Bahamas, where we departed for Bermuda and started our Atlantic crossing."

Jonathan's crew consists of four people, and each person within the crew has a unique contribution to the voyage. Aboard the boat there is a veteran sailor who has owned a sailboat for 14 years, has sailed all along the west coast of the states and has made plenty of long passages. Additionally, he has chartered all over the world. The other two crew members are a sailing couple who own an older version of the Leopard 40 and have used her for quite a bit of sailing. This team of sailors sounds like the perfect combination, as you have the owner who naturally knows his yacht the best, a seasoned sailor and a couple of sailors who have a wealth of knowledge about catamaran sailing on a very similar yacht.

You have your crew chosen and now it is time to make sure the team works well together. "We did extra training together, as a crew. It was important for us to spend time sailing together-- reefing, raising the sails, tacking  and being on the water. We all met in Abacos and spent our time preparing there," Jonathan reveals.

The two is one and one is none theory

Aside from the standard safety gear, what should you bring with you? Jonathan shares with us the additional safety and backup gear that he and his crew supplied, "Aside from all the general offshore sailing safety gear, we have three EPIRBs (Emergency Position Indicating Radio Beacon), inReach satellite communication, additional satellite phone, every passenger has a safety harness with a tether and strobe light, and a two way hand held with GPS capability. Two is one and one is none. You should have at minimum two of everything. We have four GPS chart plotters so if one goes out we have replacements. A big challenge is to try to anticipate everything that could go wrong and what you will have to fix. You take a fuel pump and an oil pump, but what about a water pump? Deciding what to bring is a challenge and there are a million things on a boat. You have to have spares to the spare. You also need electronic and paper charts for everywhere that you intend to go."

In addition to what was mentioned above, Asteria is also equipped with radar, spinnaker, water maker, 50 gallons of spare fuel for extended range,  emergency water and equipment, every tool imaginable, spare halyard and sheets, gasket, engine parts, and the list goes on.

One more essential item that Jonathan mentioned was the value of an extensive medical kit. This is an important one! In addition to the kit, one of his crew members is an EMT with many years of experience.

When on a crossing, your world can revolve around breakfast, lunch and dinner. It is also the time when the whole crew gets together to break bread. So whenever possible, you want to make mealtime enjoyable. Before your crossing take some time to find out what you like and what you don't like, with regards to canned meats and vegetables. And don't be afraid to try new things. It is important to also do your research as it relates to the shelf life of fresh fruits and vegetables.

Jonathan suggests planning at least three weeks of food. "We try to plan at least three weeks of food, based on size and limitations of our fridge and cooler. Things like rice, pasta and canned goods are foods you eat three weeks at sea. Things like fruits and vegetables can last up to two weeks and the  fresh stuff will last us a few days to a week. We plan to fish so we hope to supplement our diet with that. On our way to Bermuda the seas were too rough for us to catch fish, but I have two trolling rigs that are run consistently and I have caught some big fish. The biggest fish being a 3 foot Mahi that I got 16 meals out of."

While the crew hopes to catch fish, they provision with the expectation that fish may not be caught, they are just a very tasty bonus!

Isn't this what it always comes down to? And are you wondering what ideal weather window would look like for a sailing catamaran? Jonathan told us that in a perfect world he and his crew want winds between 15 and 25 knots, on a beam reach with following waves. He laughed, "If we could put in a weather request, that would be it." Sailing from the Bahamas to Bermuda is about a 730 mile trip and on average should take five days. Asteria and the crew made it in four days and ten hours with a phenomenal weather window. "We raised our sails in Abacos and dropped them in the Bermuda channel. We were on a beam reach the entire way and the winds never dropped below 14 knots. The highest winds we saw were 30 knots. We had rough seas the first couple of days," Jonathan explained. The crew currently has a five day weather window. They are looking for a good start and will adjust their plans with the weather. The boat is equipped with a spinnaker which they will put out in 8-10 knots on a downwind sail and they can do up to 9 knots with that. "It's not a sprint, it's a marathon," according to Jonathan. "A lot of people talk about making this crossing, but very few go through with it. It can be done, and we believe it can be done.  It is like eating and elephant, you just do it bite by bite, mile by mile."

Podcasts, books, music, movies, the list goes on. What a lot of people forget about ocean crossings is that it will be dark half the time you are on your voyage. Jonathan explains that aside from board games, books and playing cards, two things he looks forward to every day is the sunrise and the sunset. "It is amazing to watch these two events each day, with no one around and no land in sight. Star gazing is another way to pass the time. When you have no light pollution it is a spectacular experience. You also have plenty of downtime for self-discovery."

While you will undoubtedly experience trying times during an Atlantic crossing, if you have properly prepared for your voyage you will have nothing to worry about. Embrace the experience.  Asteria, named after the Greek Goddess of the Stars, will guide her crew through the ocean safely to the Azores and then on to the Mediterranean where she will spend the next two summers before heading back to the Caribbean. Jonahthan confesses, "That is a tentative plan, but as all full-time cruisers know, sailing plans will undoubtedly change."