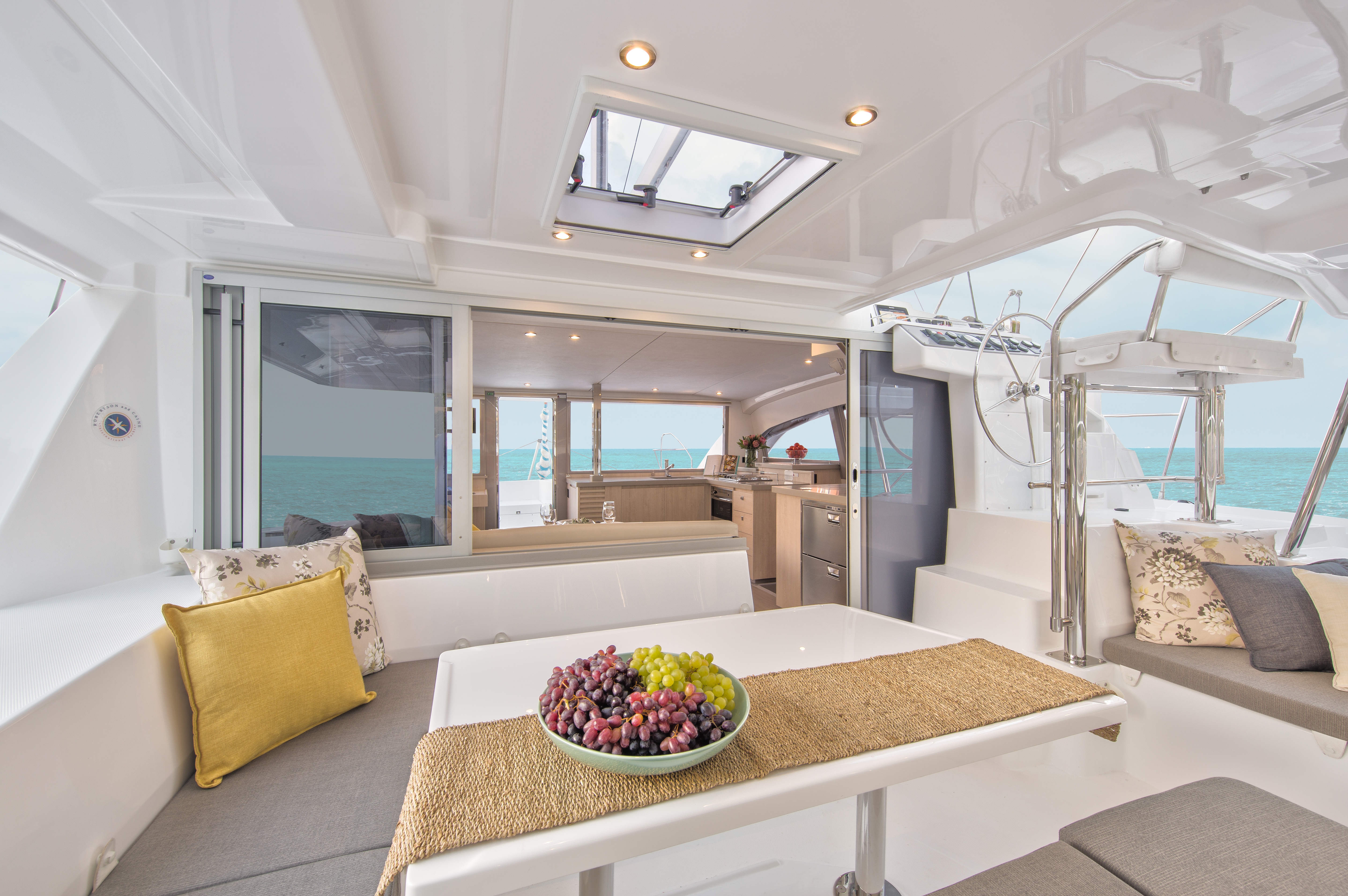 Years of design and development have brought us to the newest sailing catamaran to grace the Leopard fleet. Every detail of the Leopard 40 has been carefully constructed and the owners are proudly reaping the benefits. This cat has proven to be the complete package and has afforded buyers the leisure of not having to choose between performance, comfort and value. We had the opportunity to catch up with a couple of those buyers who have affirmed what everyone else is saying: Life is better with a Leopard.

It just keeps getting better for third time Leopard Owners

When it comes to sailing, Glyn and Diana are no novices. Being from the UK and having lived in Barcelona, they have sailed nearly every sea that Europe has to offer. “I have been sailing since I was a knee high little grasshopper,” Glyn revealed.

Glyn and Diana now reside in a vibrant Florida beach town on the Gulf of Mexico. The first catamaran investment Glyn and Diana made was the original Leopard 40, which they purchased second hand. “I then purchased the Leopard 39, new, and shortly after the new Leopard 40 made her debut. As soon as I could, I traded up my Leopard 39 for the new Leopard 40. “Patience”, our Leopard 40, is technically our 3rd Leopard. Before purchasing a Leopard Catamaran, we had always sailed monohulls. In fact, we owned a 42 ft. monohull, with a 9 ft. keel! This would not be compatible with the shallow waters of Florida that we are sailing in now.  Monohulls are perceived to be much faster, but cats point very well. After owning a cat, I would never go back.

We are very pleased with her performance and ease of handling. The 40 is totally different from the older models. She is an absolutely brilliant boat with a beautiful design and plenty of space. Almost everything on the new Leopard 40 can be done from the helm. The single line reefing is very handy and exactly what we were looking for.  She is a fun and easy boat to sail,” explained Glyn.

When asked about their future sailing plans, Glyn and Diana are proud to say that these days it is all for enjoyment, “I am delighted to say that Diana and I sail together all the time in the Gulf of Mexico and Sarasota Bay. One of our favorite things about owning a Leopard 40 is the ability to do a lot of day sailing trips together. We love to drop hook for the night and sail back in the morning.”

Powerboater finds peace in a sailboat

Andy, owner of the Leopard 40, “Miss Chevious”, knows a thing or two when it comes to purchasing a boat. “I searched every single catamaran around 40 feet before I made any decisions. Performance-wise the boat just works. I have the owner version and I am very happy with it.” Andy continues, “I was a power cat guy and I’ve owned Sportfishers.  I gradually moved from power cats to sailing cats. I have rigged my Leopard 40 for sport fishing, she has a live bait well and rod holders. My favorite feature is the layout. Also, her performance under power is really good and she sails well. The engine rooms are nice, clean and easy to work in and I enjoy the ease of the systems.”

Prior to owning the Leopard 40, Andy had owned a 50 foot catamaran. This time around, he found that the Leopard 40 was the perfect fit. Andy purchased his yacht on December 6th, 2015 and hit the ground running. “So far I have sailed from Ft. Lauderdale to the Keys to the Turks and Caicos, to the Dominican Republic and then Puerto Rico; right now I am in the BVI. I live aboard the boat full-time, every day. So far everything is good, I am very happy with the boat.” After spending time in the BVI, Andy will sail on to St. Martin and St. Barth’s, then eventually to Trinidad, Aruba, the San Blas Islands and through the Panama Canal back to San Diego, which is technically “home”, but when you own a yacht, the term home is used very loosely.

Andy’s future plans will always involve being on the water, and now they will be in the luxury of a Leopard, as he reveals, “I may sell her in two to three years so I can upgrade to a new Leopard. I am definitely a Leopard fan for life.”

View the Leopard 40 for yourself! The Leopard 40 and other sail models will be on display at the Annapolis Boat Show. Contact us for more information.