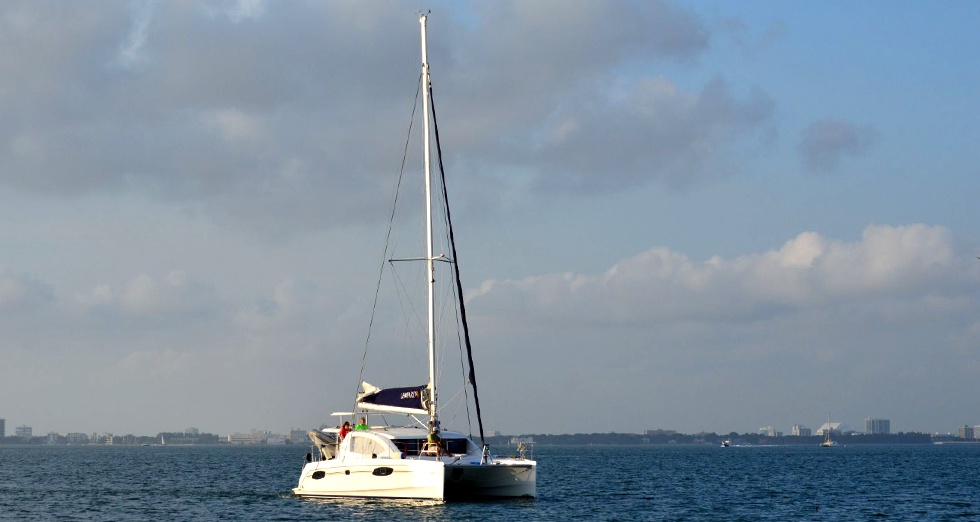 Leopard 39 owners Tony and Maria take us through an interesting comparison between a Leopard 39 and a similar size model from another builder. This comes to us from a couple with more than 40 years of sailing experience! Thanks, Tony and Maria. We wish you the best as you continue logging miles on your Leopard 39.

This last May we rented a Lipari 41 sailing out of the British Virgin Islands to see if this was the boat we wanted to buy. As we approached the charter location we were a bit concerned because we had booked the Lipari about a year ago- some 6 months before we purchased our Leopard 39. (Our purchase date had been moved up due to special tax considerations for 2013) and we did not want to find that the Lipari may have been a better boat!

While the Lipari was a bit larger than our Leopard (39.21' L x 22.15' W) as opposed to (37.5' L X 21' W) respectively, the Lipari has a peculiar slanted cockpit that 'leaned' toward the cabin door. (We assumed that the slant was to allow for headroom while making the boat appear more sleek). This slant tended to make people feel unbalanced and in fact two of our crew actually slipped!

The Lipari tended to sail OK however; I would say that our Leopard 39 is faster and actually points to windward a little more efficiently- with a sail area of over 300 feet. The Lipari sail area is shown as only 292 feet while pushing more weight- 21,605 lbs. vs 20,073 lbs.

For engine power- which is used more than most people think, the Leopard exceeded the Lipari by 31%. The Lipari comes with two 20 HP diesels while our Leopard is equipped with two 29 HP Yanmars.

The generator/AC in our boat is definitely set up for more comfort as well. While our Leopard has AC vents in both cabins and the main salon, the Lipari cooled only the cabins. There were no vents at all in the main salon. The generator on the Lipari also went out once with a dead battery. Apparently, if things are not just right...the generator will not charge its own battery!

We found that the bunks in our Leopard were about the same size and they had easier access- both climbing in and out. Within the design of all catamarans there are structural cross members that support the hulls right in front of each bunk. The cross members on the Lipari seemed to be taller or 'thicker' causing some pain in the legs when climbing in or out. We would suggest that all Catamaran manufacturers 'thin down' the center portions of these cross members to ease the access, especially for shorter people.

Water capacity on the Leopard is also better with over 200 gallons vs. 140 gallons. Our Leopard also has all electric heads while the Lipari had tiny toilets with manual heads. The sinks in the Lipari were almost unusable- as the faucets were ‘in your face’ with sinks that were way too shallow.

All in all, we were very pleased to find out that our Leopard was a much better value. Our comparison determined that the overall comfort was better on the Leopard, even though it’s a little smaller. The Leopard is equipped with all electric, including an electric winch for bringing up the dinghy. The Leopard also sails like a dream and powers along very well. We believe that Leopard builds a better boat. Better performance, more comfort and superior equipment for an overall better value- especially when the price tag is some $100,000 less!

We believe that because Leopard manufactures so many boats for charter and they receive and respond to feedback from those customers- they have learned the importance of building boats that people want to sail.

We love our new Leopard 39!