One Life, Sail It!

“The Sea, once it casts its spell, holds one in its net of wonder forever,” said legendary undersea explorer Jacques Cousteau. And there is so much wonder in the vast blue space that spans over 70 percent of our world’s. It is believed that, above the azure surface, many islands remain yet to be explored. Underneath is a world of its own, teeming with life unlike anything known to shore.

The words of Cousteau resonate deeply with Frik and Petro, themselves caught in the spell of the sea. This South African couple is on a quest to explore every corner of Earth’s oceans aboard their Leopard 45 catamaran. And, they are sailing the globe with sisu.

“Sisu” is a Finnish word that describes a form of grit, courage, and resoluteness in the face of adversity. At its core, sisu is the ability to decide on a course of action and stick with it, no matter the outcome, even if that action is sailing the world.

A sense of wanderlust runs through both Frik and Petro’s veins. This desire for adventure took them on extensive land travels before they set sail. The two have been on multiple off-road safaris into the desert and brush environments. For these excursions, they went with only a four-wheel-drive vehicle and a tent for camping.

“I’m pretty much an explorer,” says Frik. “I like safaris, and I like seeing new places and new countries.

The ocean has always held a great fascination for Petro; born and raised at the coast, it’s sheer vastness intrigued her. Experiences with scuba gave her a fantastic view of what can still be discovered. So, Petro’s new life is a natural progression from the things she’s always loved.

Frik and Petro officially got their Leopard catamaran in September last year, then stocked up and set sail in February. They departed Cape Town for the high seas in their new Leopard 45, named, of course, “Sisu.”

Their shakedown cruise was a proper training trip – the couple sailed some of the big waters around Cape Town, South Africa.

After their maiden voyage, the couple gained more confidence in their sailing abilities and grew more adventurous. They left Cape Town in February this year, heading north.  Their first stop was Mercury Island. It is a small rocky island off The Diamond Coast of Namibia. Mercury is one of the most important island seabird breeding sites along the Namibian coast. Then they headed further north where they stopped at Saldanha, a small village with a naturally sheltered harbor.

After a 32-day nonstop sail they arrived at Cabo Verde. The next port of call was the Canary Islands, where they visited six of the seven islands.  Frik and Petro have their eyes on sailing through the Mediterranean heading for southern Turkey. They will stop over in Tunisia, which will be the 97th country that Frik has traveled to over the years.

“Because we want to,” says Petro, simply. “We do go off the beaten track.”

The couple’s more long-term plan is to circumnavigate the globe, also potentially venturing across high latitudes known for icebergs, storms, and heavy seas.

To prepare for such challenging cruises, Frik and Petro plan on testing their Leopard Catamaran for high-latitude waters. Their goal is to learn what to expect and be able to handle any situation. Eventually, they want to make their way across the Baltic and Norwegian Seas, up to Iceland, and eventually down to Antarctica.

“I’ve been to Antarctica before, but on a larger Scientific Explorer boat. But it would be great to go on our own time,” says Frik.

Before setting sail, Frik worked for years as a software engineer for the United Nations. His job required very long hours, seven days a week. The work took him to 96 different countries, either by car or plane, with the occasional ferry ride thrown in.

“Eventually, you get to a point where you just look at your life,” says Frik. “I decided enough is enough, time out. I stayed there for another year, but at the same time, when I knew I would finish the project and move on, I started selling all my properties. I put the deposit down for my Leopard 45. For me it was a cool-down period to get everything done. This is how I ended up on a Leopard Catamaran.”

Frik had tested the sailing lifestyle before to see if it would be a good life for him. In 2008, he and his brother volunteered as crew on a delivery from Cape Town to Miami. He spent 46 nights at sea on a Leopard 40. That’s when he realized that roaming the waters was the lifestyle for him.

As for Petro, if you ask her why they decided on a Leopard for their journeys, she’ll say, “because it’s special.” 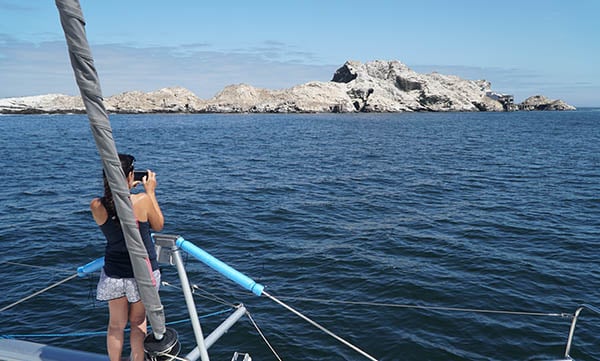 The couple chose their Leopard catamaran over a monohull primarily for the stability and the added room.

“I like that the boat is so stable that we can actually sit down and enjoy the sail,” says Frik. “It’s different than any other type of travel. You can sit down and read a book. It’s much more relaxing. Then, when you’re at anchor, we have all the space. We can sit in the front cockpit, the saloon or the back.”

“Once you get on the Leopard 45 and you sail it on your own, that’s when you realize the specialness of this boat,” says Petro. “Our favorite part of our days is having dinner and watch the sunset from the forward cockpit. This experience is extraordinary. It’s such a precious moment.”

Petro was born in Port Elizabeth on Algoa Bay in South Africa's Eastern Cape Province. Her own travels took her all over Africa. The idea to set sail came to Petro from when her children were still very young. The former business executive wanted a change from the “rat race” in an extremely competitive workplace that brought her little satisfaction.

“It was time for a change,” says Petro. “I had lost track of the much more important and soul-pleasing qualities of life, like family time, traveling, reading a good book and laughing until your tummy hurts. Sailing was a long-life passion, and it was an absolute no-brainer to make the call. ”

To support their travels, Petro works as a boat insurance broker, and Frik is using money from investments. They estimate that their circumnavigation will take maybe ten years or longer to complete, and they’re ready for the journey.

Along the way, Frik and Petro started a YouTube channel about how they made their process into full-time sailing and their thought processes. “It was designed to say this is what we’ve decided, or this is what we’ve researched, and this is how that influenced our decision,” says Frik. Their goal is to help people who want the same lifestyle they now have.

The couple’s motto is, “One life! Sail it!” That’s exactly what they’re doing – sailing with sisu.