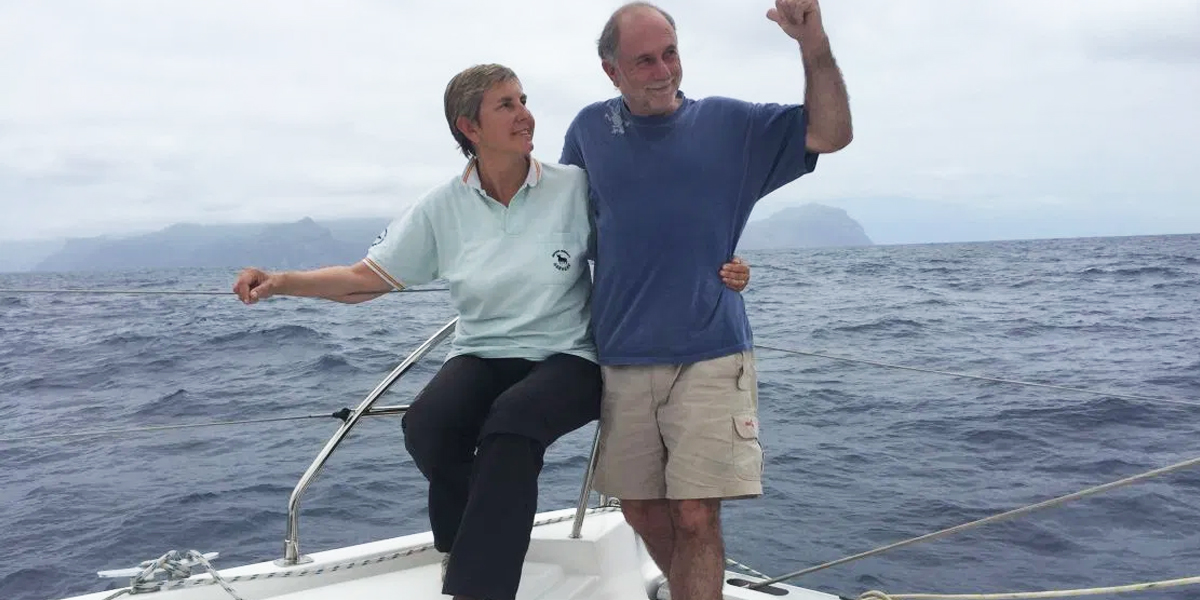 When Joaquín and Mónica announced to their friends and family that they would be leaving their lives on land to live aboard at sea, no one was the least bit surprised. “We spent all of our lives sailing, we have always been fascinated by sailing, and most of our friends we know from the yacht club where we do a lot of sailing,” Joaquín explains. The couple has logged thousands of miles sailing from Bracelona to Turkey, and everything in between. So, it came as no shock when the couple announced they were ready do what most people only dream of— circumnavigation. 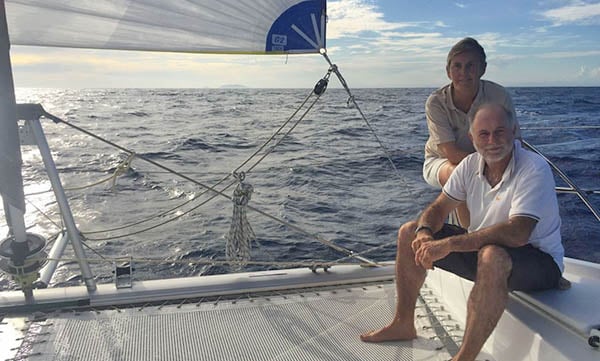 What did come as a shock was the decision to not embark on this journey aboard their 65 ft. monohull, “Wallstreet”, but instead a catamaran that was 20 ft. shorter in length. “We never thought we would become catamaran owners. People still don’t understand how we adapted to a catamaran. We still don’t understand how we are not only catamaran owners, let alone very happy catamaran owners. The question has never been, ‘how are you going to sail around the world?’ the question has always been ‘how did you move from a 65 ft. boat to a 45 ft. catamaran?’,” Joaquín reveals.

The couple enjoys the comfort and the space of their Leopard 45. But one of the biggest selling points was the displacement of a catamaran vs a monohull. “The displacement was nearly double on our monohull. Had we stayed with our old boat, in terms of draft, we would not be able to visit many of the places that we want to go.  In terms of living space, the design of the Leopard has been very well thought out. We also love our forward cockpit and the hard top over the helm is great, because it rains in Brazil almost daily, and when it’s not raining, the sun is hot,” Joaquín attests.

Joaquín and Mónica spent years preparing and outfitting their monohull to sail around the world. But during a trip aboard their yacht in Turkey, they realized that the boat was just too big for them. They decided that for winter season they would jump into the boat show circuit in search of a new, smaller, monohull. But after visiting enough boat shows, the couple could not deny the allure of a catamaran. It was at the boat show in Le Grande Motte that the contracts were signed. While waiting for their Leopard 45 to be built, the couple spent one last season in the Mediterranean aboard their monohull, and then it was off to Cape Town to take ownership of the new Leopard 45.

As it generally goes with cruising couples, they didn’t wake up one day and decide to go sailing. It is a life long passion for sailing and the dream of exploring and discovering through an alternative lifestyle that had Joaquín and Mónica working hard for decades to achieve their lifelong goal. As Joaquín explain, “We were working very hard before we went sailing. I was working with my own company and I had staff and employees, so it was quite complicated, we were members of different associations, I was president of a yacht club. It was as much of a busy life as you can imagine, and it is the opposite of what we are doing now.”

The journey began in Cape Town where Joaquín and Mónica spent three months learning everything they could about their yacht and outfitting her for bluwater sailing. It was there in Cape Town that they befriended the crew aboard  SV Oroboro, a Leopard 40.  Both vessels set sail for Brazil from Cape Town around the same time, and once in Brazil, they have spent time traveling the country together. The main goal for Joaquín and Mónica, as well as their new friends, is to explore the world by boat. "We want to see as many places as we possibly can by using our boat as the main source of travel. But in each new country we visit we also want to spend time on land. We love history and we love learning local culture. We are not just sailing, we are exploring the world," Mónica explains.

As for what to explore once they depart from Brazil? "We plan to be traveling for 10 years. We want to sail up to Canada, do all of the eastern US coast-- New York, and  that area in the north of the Atlantic. Later, we will go back to the Caribbean, Belize, Columbia, Panama, and through the Panama Canal. Three years from now we will go through the panama canal and then follow that traditional route of pacific eventually through to Australia.

The couple has set a courageous itinerary, and you can follow along on the journey! Check out and subscribe to Plan B's blog so you don't miss a beat!