Lessons Learned: A Couple in Search of the Perfect Boat 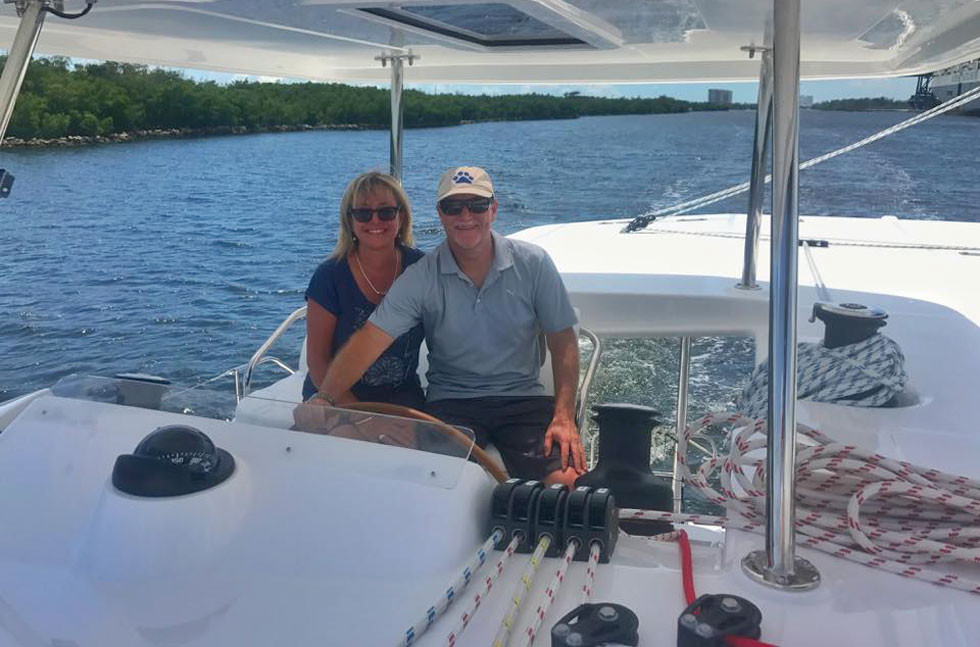 Have you ever wanted to know what the process of buying a yacht looks like? The idea that there is a “right way” to find your perfect boat is a false notion. Every journey is different and every buyer is different. Some of the happiest yacht owners have purchased their yacht sight unseen, while other fully satisfied buyers spend years visiting boat shows and factories, narrowing it down to exactly what they are looking for.

Miranda and Owen, whose approach was the latter, share their story and advice in hopes of helping others in search of the perfect yacht. 1. What kind of boat to choose?

“This journey started a long time ago – I have sailed most of my life and my daring, darling wife has been around and on boats for a large part of her life. In our early twenties, we spent a season as skipper and hostess working for Sunsail in Corsica managing twelve yachts on two-week flotilla trips,” Owen explains, “…fast forward to 2006 in Seattle (our sixth country and our fourteenth home and with a 13-year-old son) we were surrounded by the beautiful waters of the Puget Sound and so it was inevitable that the boating bug would bite again… a couple of years later a friend invited me to the Seattle boat show and that is when the search started.” According to Owen and Miranda, what had originally started out as a search for a Trawler Yacht, eventually developed into a quest for a sailing catamaran. You may wonder about the steps behind this process, and from what Owen explains, after researching fuel costs, their Trawler plans were scratched and he decided that sailing was the way to go. As Owen states, “I was now convinced the thing to do was to purchase a capable yacht, outfit it correctly and then sail off into the sunset upon retirement.” One of the many advantages to purchasing a new yacht is that you have the luxury of building and outfitting the yacht to your comfort preferences.

Owen and Miranda were frequent boat show attendees, stating that once they had decided that they would purchase a sail boat they added both the Annapolis Boat Show and the Miami Boat Show to the list of shows that they would attend annually. And what the couple soon realized was that they were only looking at catamarans— the three main reasons being the space, the stability, and the trampoline.

Owen confesses, “All the serious sailing I had ever done was on monohulls. Could a cat go around the world? To answer that question I started absorbing every blog and every forum that had to do with catamarans – big ones, small ones, French ones, South African ones – the list went on. Every boat show we went to we poured over the boats comparing features, comparing build quality, listened to multiple sales people expound the virtues of their model over another and of course we talked to real-life sailors that were ‘doing it’!”

Which leads us to the next point…..

As a buyer’s search continues for that perfect boat, Owen explains that they will soon realize that this may very well be a near impossible task. “There is no such thing as a perfect boat. Every yacht is a compromise somewhere. It could be the helm station, it could be the galley, it could be the saloon – you name it there is something not quite perfect in every yacht we climbed aboard.”

What you must then ask yourself is, what features are the most important for me?  Owen confirms, “You really have to define your mission carefully and as part of that what you are personally comfortable with when it comes to safety on board.”

And the search continued, “The years ticked by. I continued my research diligently - I avidly read every blog of every catamaran cruising couple I could get my hands on. I downloaded and studied every spec of every catamaran that was vaguely within our range and I continued to drag my poor wife around more boat shows. Which brings me to my next important point— you need to start limiting the options.”

To really drill into the options that are out there, the next step in your purchase process should including narrowing down the desired size of the yacht and the amount you are willing to spend.

“In our case we realized we needed to set a length limit and a price limit in order to get really focused. We decided upon the 45 to 50 foot range as being optimal.” In an attempt to narrow down the search Owen and Miranda set a budget, and then considered the ease and access of maintenance tasks while at sea, the comfort and size of the cockpit and saloon, as well as the manageability of the sails.

It was around this time in the search process when it was announced that there would be a new and improved version of a boat that Owen has his eye on a few years back.  Owen was on the next flight to LA for a sea trail, which turned into him being able to negotiate a refundable deposit. Owen explains, “The reason I wanted it to be refundable was because we were about to head home to South Africa for a family visit and also to visit three boat yards in South Africa.

If you have learned anything from reading along thus far, it should be that timing is everything! Of the three factories that Owen and Miranda visited in South Africa, the third one was Leopard Catamarans to view the Leopard 48. Although never a concern of his, several competitive brokers had made attempts to scare Owen away from purchasing a Leopard 48 by expressing their concern for the safety of the forward cockpit.  According to the American Boat & Yacht Council, a boat must be able to drain 75% of the volume in a maximum of 90 seconds. The forward cockpits on a Leopard Catamaran has been tested and proven to drain 100% of volume in 45 seconds. Owen explains, “I did not subscribe to those fears. However, I was concerned about the impressive flat front saloon window. It was great in that it let a lot of light into the boat however I worried about the integrity of that window in the event of a large wave smashing against it. Robertson and Caine, the builders of the Leopard, graciously allowed me into their factory to poke and prod any part of the various yachts they had under construction. When I saw the build quality and the strength of the structure housing the front saloon window I was completely satisfied that strength would not be an issue. I spent a happy few hours in the factory looking at all aspects of the build and came away a very satisfied boy!”

It was at this point in the process that Owen and Miranda decided to revoke their deposit on the other yacht. “The primary reason [for revoking the deposit] was the forward cockpit on the Leopard. We had really fallen in love with that space and that coupled with the very modern clean look of the Leopard affirmed that it was a better buy,” Owen explained.

Now comes either the easiest or the hardest part of the whole process—making a decision. Whether it is a leap of faith, or a confirmation of confidence, the moment will come.

After visiting the Robertson & Caine factory and revoking their deposit on a competitor yacht, Owen and Miranda had seemingly decided on a yacht. But the search process that had been nearly a decade in the making was still ongoing as they set out to the 2016 Miami Boat Show. Here they had seized the opportunity to take one last look at everything the catamaran industry had to offer and even got enticed by a new option they hadn’t considered before. They almost pulled the trigger after some hard selling by the sales broker, but their hearts were still leaning towards a Leopard.

“After a couple of sleepless nights, we decided to go for it. A very efficient process followed selecting the various key options and ultimately we sent a wire transfer and we were now ‘owners in waiting’!”

As you may have guessed, Owen and Miranda went with the Leopard 48.  “With the big decision made we still went to the Annapolis show in October – but now the mission was ‘toys’ shopping – that is another whole saga. For now we are very happy, expectant owners and we will be seeing our hull in March when we make a visit home.”

“Sarabi” Owen and Miranda’s Leopard 48 is currently on the production line at Robertson and Caine in Cape Town, South Africa. To follow their journey and the countdown to her maiden voyage, visit their Facebook page.

If you want to get started on your quest to find the perfect boat, then click the button below to use our "Build Your Boat" tool, and build any of our models to your preferred specs.