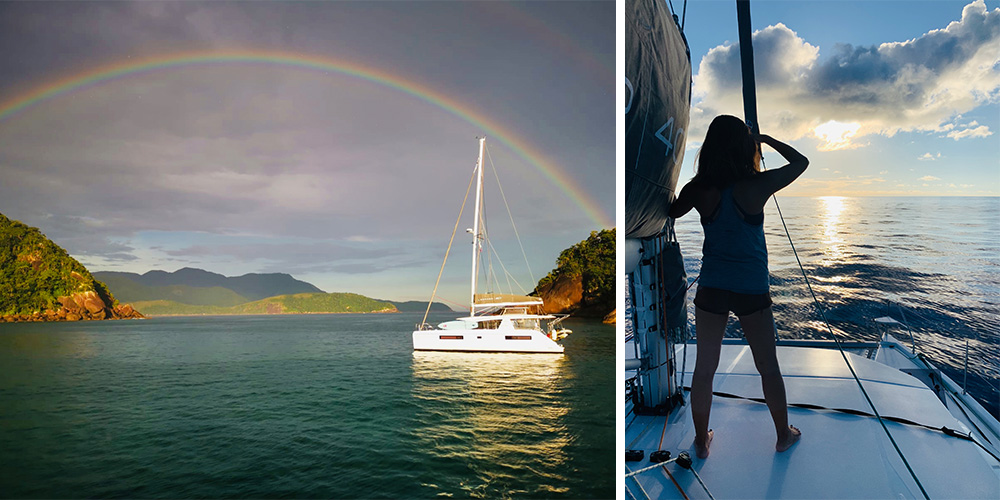 The amount of time was exactly one year. The moment Francesco and Yuka put the pen to the paper, confirming the deposit on their Leopard 40, they had one year to plan their exit strategy. "We needed time for preparations, which was paramount," they begin, "The first thing we did was meet with our financial advisers to ensure we got our numbers right.  We had to quit our jobs, which was not easy. And we had to share with some people what we had done just to confirm that we weren't crazy. We sold everything we owned -- furniture, motorcycles, cars, and we rented our California home that we loved so much. We packed our lives and put them into 14 boxes."

What we find to be the most captivating about many of our Leopard Owners is that they turn sailing dreams into reality. But it is not something that is achieved out of thin air. It is a formula that consists of working hard and knowing the right time to take the leap of faith.

Francesco and Yuka's  journey to adventure began when the couple took a kite surfing trip in the Caribbean and stayed aboard a Leopard 46. "We fell in love with the lifestyle. This was our first time being on a sailboat. We loved that we could inflate our kites on the trampoline and enjoy beautiful island destinations all while kite surfing," Francesco explained. When they returned to the San Francisco, they immediately enlisted in sailing courses. The couple spent the next four years digging deep into sailing and navigation. And if you've ever sailed in San Francisco Bay, you know she is a wind machine, and thus made for a great training ground for Cape Town.

In 2018, the Leopard 40 received a refresh. The bulk heads in the cabin were opened up to create semi island berths in the owner and aft cabin. The couple's Leopard Sales Agent had reached out with images of the updated model and they were blown away. Yuka fell in love with the design, and they decided that the Leopard 40 would be the yacht to carry them around the world and across oceans.

"Of course we were scared to do a complete lifestyle change, but once you enter it, there are so many benefits. You have more time to dedicate to reading,  cooking, and learning new things. When you live a life with a 9-5 commute you don't want to take your time after work to do these things. Now we have all the time for these basic tasks and we do them with pleasure. The trade is totally worth it. My only concern now is when do I have to give up this lifestyle," Yuka reveals.

How do owners make the decision on location of handover? Well, naturally there are a lot of factors that come into play here. For Francesco and Yuka, the original plan was not to sail from Cape Town To Brazil (where they are located at present), but as it goes with boating, plans change. For this couple, plans changed before they even had the boat in their possession. "We had intentions of receiving our boat in Fort Lauderdale, but then when we looked at costs we had to consider maybe, just maybe, we could do a Cape Town handover. Our friends thought we were crazy to do an ocean crossing. But we thought it was better to start with the hard stuff. The experience of crossing the Atlantic was amazing, and now that we have done it, I can tell you that coastal navigation is much more difficult."

There was also another factor that played into the decision to do a handover in Cape Town, and that was that going to Brazil, which was big on the couple's list of destinations, is not an easy task when coming north to south. Francesco explained, "Sailing from the Caribbean to Brazil is completely against the wind and current. Had we started this journey in Fort Lauderdale and the Caribbean, experiencing Brazil would not have been possible."

Preparing for Brazil and Beyond

If you are a first time yacht buyer, you are going to have hundreds of questions about your outfitting your yacht for the activities you need her suited for. In Francesco and Yuka's case, it was for ocean crossings. One great benefit of joining the sailing community and the Leopard Owner's community is that their are so many groups and forums out there where you can meet like-minded people who are doing or have done exactly what you are looking to do, and they are willing to offer advice and support. Franceso shared that he spent a fair amount of time in forums discovering all the information he could about solar power, all different systems on a sailboat, and sailing and cruising in general. Deciding how to outfit your boat can take a village. There are so many bells and whistles to consider, and the options can seem endless. There is no right or wrong, everything is a trade off.  You really need to focus on your own priorities.

One day Francesco decided to seek advice in a forum. "I posted in a cruiser's forum 'Sailing from Cape Town to Brazil, has anyone done it?' There was a really kind South African gentleman who gave us such great advice. We met on the forum and then in person in Cape Town. He spent a year in Brazil cruising with his wife, and gave me his log book and contacts, and helped me a lot to find the courage and the motivation to do it. People did try to intimidate us about visiting Cape Town, but we found everything in that city to be nice and welcoming. Cape Grace Marina is one of the most beautiful marinas in the world according to many of the cruisers we met."

Prior to departure for Cape Town the couple had to acquire visas, get vaccinations and obtain a postal service. For mail, they selected a company that gives you a physical address, who is able to scan the mail and send it in an email. You have to consider things like getting called to jury duty, which Francesco said he did. One can imagine that being excused from this is not an easy feat. But these are the types of occurrences that you must plan for when you are going off of the grid.

Once it was time for handover of their Leopard 40, Oroboro, Francesco and Yuka were on a plane to Cape Town, South Africa.

Francesco and Yuka spent a total of three months in Cape Town. During this time they got to know the crew who would assist them on their maiden voyage, prepped their boat for heavy sailing and went on plenty of shake down cruises, because once you leave Cape Town, you aren't going back any time soon. The crew that the couple chose to go with them on their sail across the Atlantic was a very experienced couple who has circumnavigated twice. They had the knowledge and experience to not only help with the crossing, but to also teach Francesco and Yuka everything they know along the way. They gained sailing and boating knowledge, but even things like learning how to bake bread on board and how to conserve water.

Unique experience:  Moonbows or Lunar rainbow (close to Trindade).  A moonbow, is a rainbow produced by moonlight rather than sunlight.

The goal was to sail the boat from Cape Town to Brazil, with a few stops along the way. The first leg of the journey was from Cape Town to Luderitz and Walvis Bay, Namibia. "Our passage lasted 79 hours, we covered 433 nautical miles, 15 of which under engine.  We had winds ranging from 3 to 26 knots. We used all possible sailing combinations. Main and jib, jib only, parasailor, asymmetrical spinnaker. We are very happy when sailing with the parasailor, that was the best dollar spent on the boat," Francesco reflected.

From Namibia it was off to the iconic St. Helena, which is a must see if you ever find yourself crossing the Atlantic Ocean. This leg of the trip was 1,210nm and SV Oroboro arrived there nine days after she departed from Namibia.

After a few days in Namibia, the crew was off once again for the longest leg of the trip. It took 18 days and they sailed 2,271nm, until they finally found themselves celebrating the accomplishment at Enseada das Palmas-- Brazil!

Reflections and the Future

Living aboard a sailboat and full-time cruising is rewarding and challenging. You start to learn a lot about yourself, and everyday you are accomplishing goals that you did not know existed.

Francesco explains, "You are basically off the grid. Everything you took for granted on land is not taken for granted at all on a sailboat. Even if you have a watermaker you can't use the amount you would need for your habits and lifestyle on land. Discovering this is a switch in mentality. It makes you think about conservation and how important it is. Saving power, saving water. At the end of the day our planet is like a sailboat in the universe."

And where does this small planet, SV Oroboro, intend to go next? "The goal is to circumnavigate, but we don't want to do it just for the sake of it. We want to take our time discovering the world. We want to boat travel and land travel. We plan to leave our boat at times to see new places. The first places on the list will be Argentina and Chile. After that we will start sailing along the coast of Brazil towards the Caribbean, staying south of latitude 12 during hurricane season and then heading up to the Windwards islands once that season is over."

To follow the adventures of SV Oroboro, follow this link to check out their blog. The couple posts regularly and they offer great advice to anyone considering this alternative lifestyle.