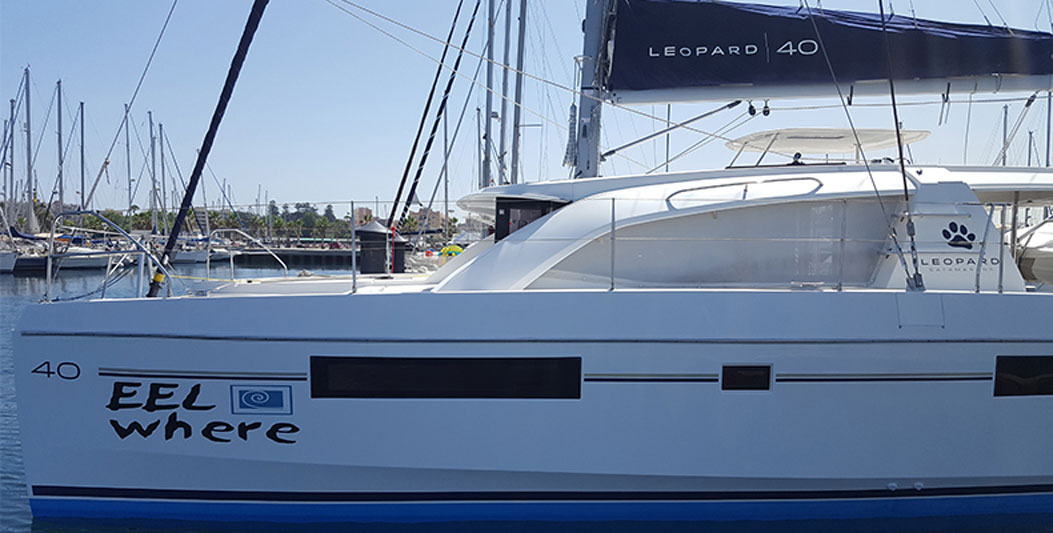 There is no such thing as a weekend when you live on a boat,” Leopard 40 owner, Eel, explains, and we would have to agree. There is nothing quite as liberating as knowing that you could go anywhere in the world at the drop of a hat.

And while Eel and co. are set up for success in the Mediterranean for the time being, he has accomplished a fair amount in his short time of ownership.

“Eel Where” was purchased on Valentine’s Day at the Miami International Boat Show, and it has been an adventure ever since. “I recently completed my first Atlantic crossing. I set sail on May 21st and arrived in Lisbon on June 21st. This was my first time crossing the Atlantic. Stopping along the way, it took one week to arrive in Bermuda, and two more weeks to reach the Azores, then another week of sailing and we had arrived in Lisbon. Straight from there to we were off to Gibraltar for a day, and then on Sardinia we spent time in Carloforte. From there we stopped in Rocella Ionica, Italy for fuel, and finally straight over to Missolonghi, Greece, where we arrived on July 7th.”

Eel provided us with the image to the left, which shows the Leopard 40 sailing at 13 knots. Eel also shared that at one point during the crossing they endured 40 knots of wind in 20 foot seas! “After crossing the Atlantic, my definition of rough has changed. We were able to cover about 150 miles per day, give or take.  We have a satellite so I am able to get the weather at any time, and some of those storms were huge!  It was not too crazy rough for very long, but there were times when we were rolling for days at a time. But you just keep moving along. You set the point of sail and base everything off of the weather. We were able to really hit some sweet spots,” Eel described. And if his Atlantic crossing sounds like the trip of a lifetime, that is because it was. His future plans are to continue eastward. “EEL Where” is currently located in the Ionian Sea, just off the coast of Greece, but the Leopard 40’s position is always moving.

While we all love the idea of living aboard and roaming the world, the majority of people who plan on living aboard also need a steady income or savings in order to live out their dreams, and we believe that Eel has perfected the art of this. He is the owner of a software company and works daily. Eel Explains, “My boat is my home and office. With my satellite dish, I was able to work all the way across the Atlantic. I have a radar, and the catamaran allows for 360 degree views. The distance from where I work to the helm is very close. If I want to emerge to feel the wind at the helm, all I have to do is move 6 feet. I will be in an air-conditioned work environment, and within seconds move into and exhilarating water-filled adventure.” And what’s the best advice he can offer to someone who is considering working aboard? “Always face forward,” Eel Recommends.

As for advice for anyone who is currently in search of a new yacht, Eel suggests the following: “Know your voltage and know where you are planning to sail it. If you are planning on ever sailing to Europe make sure you get both voltages put on board because sometimes you just want to plug in. Also, if you plan on going to the Med make sure you get Med Moor training. I was fortunate to get it right on my first try, but if you don’t put enough chain out you can lose your anchor.” He also suggests adding a few items, “Two electric winches help with single-handling the boat. My satellite and solar panels are used every day. And my code zero has been a lot of fun.”  And his best advice of all? He suggests, “Don’t let your boat sit in the harbor!”

If you want to learn more about the Leoaprd 40, schedule an appointment to join us in Annapolis at the United States Sail Boat Show. Click the button below for more details and to RSVP.