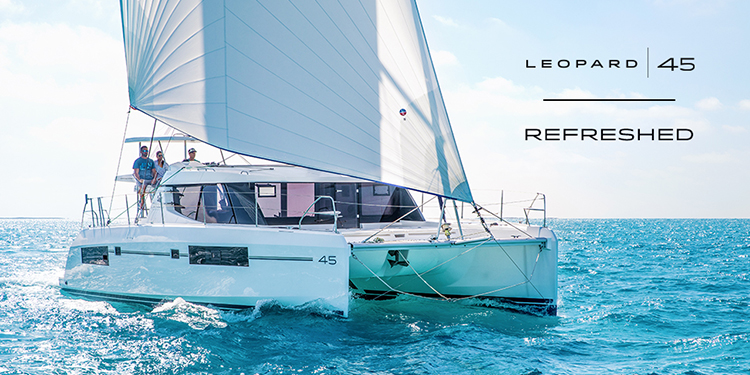 Keeping true to the standard of the Leopard brand and our strong desire to continually innovate, in addition to taking into consideration the feedback that we have received from our customers, we were eager and excited to launch the refreshed Leopard 45.

Stepping aboard the yacht there was a return in the starboard bench seating area that is aft of the helm station that has since been removed. This reconfiguration provides a more inviting lounge area when you first step aboard the yacht. We have replaced the factory cockpit cushions into a vinyl-like material that are totally weather proof, they can stay outside at all times and they are extremely comfortable. The light grey color provides the perfect contrast with both the white of the yacht and the teak (should you decide to add this option). A comfortable and fitted backrest cushion had been added to the set of cushions in all seating areas, which was not offered on the previous model. Owners and guests will certainly enjoy the comfort that this feature provides. We have also upgraded the helm seat back rest for increased comfort for captain and crew. The captain can plot the course and then lean back and enjoy a comfortable helm station that they will never want to leave.

Once you have taken in all of the new features of the aft cockpit, you can walk into the main saloon. The first change that you will notice is a design feature that has been very well received on the Leopard 50 and thus we have opted to follow suit on the refreshed 45. You will note that we have added a window directly to the starboard side of the companion way door. This was previously solid fiberglass but now you have a window creating an even better sense of openness and flow from the outside moving in. When you are looking forward from the aft cockpit of the vessel it is now easy to note that the Leopard 45 closely resembles the new generation of Leopard Catamarans. It is evident that she is the little sister to the Leopard 50.

You will also note a few cosmetic upgrades to the interiors of the yacht. We have added the jewel trim onto the finishes of the stairwells. Additionally, the sole of the stairs leading into both hulls are no longer black. They are now outfitted with the same sole that you see in the saloon. This provides a much better flow as you move from the saloon and into the cabin. Although the cosmetic changes are not drastic, it is the small attention to detail that can often grab ones attention. 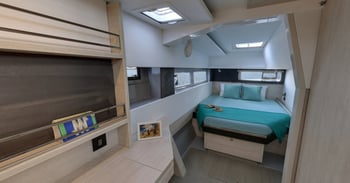 Stepping down into the owners cabin, you will notice a new option for 2019 which is the carpet. The yacht will be equipped with nice sole underneath the carpet and the carpet is easily removable, should you decide at times it is not needed. One of the most radical changes to the refreshed version of the Leopard 45 is in the owner's cabin. A portion of the bulkhead has been removed to open up the cabin. The sit down vanity on the previous version was previously forward, but it has been moved aft. The storage/ cabinets, which were originally aft have been moved forward. This provided the ability to open up the entire area that is forward of the berth. With the new configuration of the owner's cabin we had the ability to create a semi-island berth and provide much easier access to the bed. The same change has been made to the bulkhead in the port aft cabin to provide more comfort and space for guests.