In Search of the Unfamiliar

For Jason and Nikki Wynn, saying yes to the next adventure isn’t a question anymore. After three years of living full time on a Leopard 43 Sailing Catamaran, and many years before that traveling overland in their RV, finding new opportunities to explore the world is familiar terrain.

Like their time in their recreational vehicle, these days, they bring their home with them wherever they go. And they’ve been to some incredible places on their catamaran.

In only two years, the intrepid couple has sailed from Fort Lauderdale, Florida, through the Panama Canal, on to Salinas, Ecuador to French Polynesia Cook -- some seven countries to date. The Wynns have visited some of the most remote places on the planet, dived in pristine turquoise waters of the South Pacific, and navigated passages under the stars, alone in the open ocean.

They’ve made it a passion project to seek out and explore the remote and unfamiliar. They’ve seen Niue, the Cook Islands, Rarotonga, and Aitutaki, and so much more. It took three years and more than 13,000 nautical miles before we caught up to them on their first trip off-boat together.

Jason and Nikki Wynn were always fascinated by the freedom that traveling full-time with the comforts of home entailed, and after years of full-timing in an RV, they were called to take the plunge into sailing fulltime around the world.

“It's always been about exploring the world for us,” explains Nikki. “There are just remote parts of the world that sometimes the only way to get to them is by boat.”

“We've been sailing for three years. That's why we bought a boat, to find places that we never knew existed,” adds Jason.

Whether by hiking and exploring above water caves or diving in clear waters, the Wynns have made the sailing lifestyle a source of constant joy. By the time they purchased their catamaran, the couple had been scuba certified for more than 10 years already. Still, the catamaran enabled them to explore under the water in new and exciting ways.

For one, diving from your own boat is different because there’s no guide available to upfit you and keep an eye on your safety. The change required a lot of practice and a healthy dose of bravery.

The benefits were clear, though. Diving on your own time and being able to find spots that chartered boats can’t or won’t get to meant that Jason and Nikki’s dives were more rewarding than ever.

“The pace is just totally different, the vibe is different,” says Nikki. Learning to dive on your own proved to Jason and Nikki just how valuable their sailing experience was. Now they could dive at their leisure, from spots they discovered, and with friends made while sailing.

“There are so many divers out there that we were able to do our first dives with new sailing friends that we had met,” adds Jason. Suddenly, the challenge of diving without a guide was replaced by the excitement of diving with a new circle of friends. 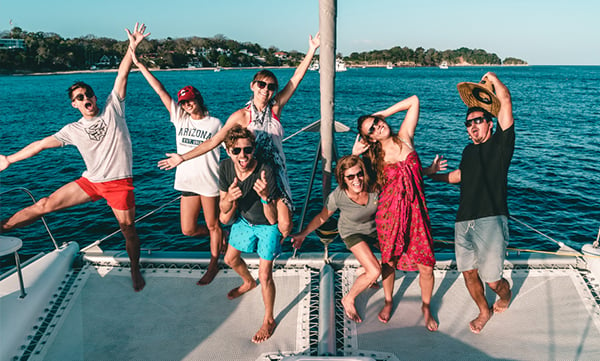 A lifetime of exploring was something to be shared, and bringing family along for the journey is essential for Nikki and Jason.

“Those experiences are no doubt probably some of the highlights,” says Jason. “Watching my mom climb a papaya tree to pull down a papaya out of the jungle, that's pretty awesome. Diving with Jason’s brother Jacob, trying to teach him how to free-dive and breath-hold and get down deep to look at some really cool places like 30, 40 feet down.

“Those are experiences that you couldn't get any other way than by living on a boat.”

For Nikki, experience has taught her that the best memories are formed by breaking free of your comfort zones, “whether that’s on a hike that’s maybe a little bit harder and a little bit more extreme than anything you've ever done before.”

“Those are the times where your greatest memories are made.”

Long passages aren’t uncommon, and in just three years, the Wynns have racked up a sizeable number of them while moving between and around two continents.

These journeys have included many moments of personal discovery, especially those night time sails where only one person is at the helm.

When they started out on their Leopard 43 as first-time boat owners, they settled on three-hour shifts. That way, no one would go too long at night without rest.

“That was our initial thought,” explains Jason. “Then, once we got out and actually started doing overnight sails and longer multi-day sails, we realized that we don't need a specific time.”

“If you’re feeling good, if you’re listening to a podcast or you’ve got some music playing and you’re pumped, maybe you can go for five or six hours.”

For Nikki, sailing at night is “the closest thing to being an astronaut” that you can be. Being on the water, sparkling with bioluminescence, during a moonless, clear night is unlike anywhere else in the world.

A man of two minds, Jason’s favorite sailing moments are a tossup between those times when he’s  “downwind, Spinnaker flying, with 15 knots of wind” or when they’re “making landfall, dropping the hook and having a sundowner.”

For the Wynns, who are embodying the sailing ethos that captures so many hearts, sailing is an adventure in itself, especially when they were just starting out. Compared to others, they said, they did it all backward.

They knew they wanted to start a life on the seas, and they decided on their boat before even learning to sail. It was a risk, they admit, but it afforded them the opportunity to learn how to sail on the boat they’d actually be using.

After purchasing their catamaran in 2016, Jason and Nikki made another decision that was instrumental to their success.

“Because we bought the boat, we actually got to learn on it.” Hiring an experienced captain, Nikki explains, gave them tips they still use today. Beyond that, YouTube has been a great resource for the couple who like to pick up maintenance skills from boatbuilders and who find inspiration in fellow sailors.

The thrill lives on each time they plan their next journey, chart their courses, and monitor weather conditions.

Now, sailing is enabling them to do more than they ever imagined. It’s bringing them closer to family, connecting them to like-minded travelers, and taking them to places most dream of seeing.

Learning is a continuous process that started with taking a leap. If you’re interested in exploring the world, Nikki says, “get your feet wet, and give it a go.”

“There's only one way to ever know if it’s for you, and that's to just go and do something.”

Equally important, though, is to remember to take each day and every adventure with a sense of humor. As Jason explains, “Don't expect just because you saw it on YouTube that it's going to be like that in reality.”

“Just take it one day at a time and try not to get frustrated,” offers Nikki.

Do you want more from the Wynn's? Then head over to their YouTube Channel now to discover their binge-worthy sailing videos!