Finding a Home in All the Edges of the Map 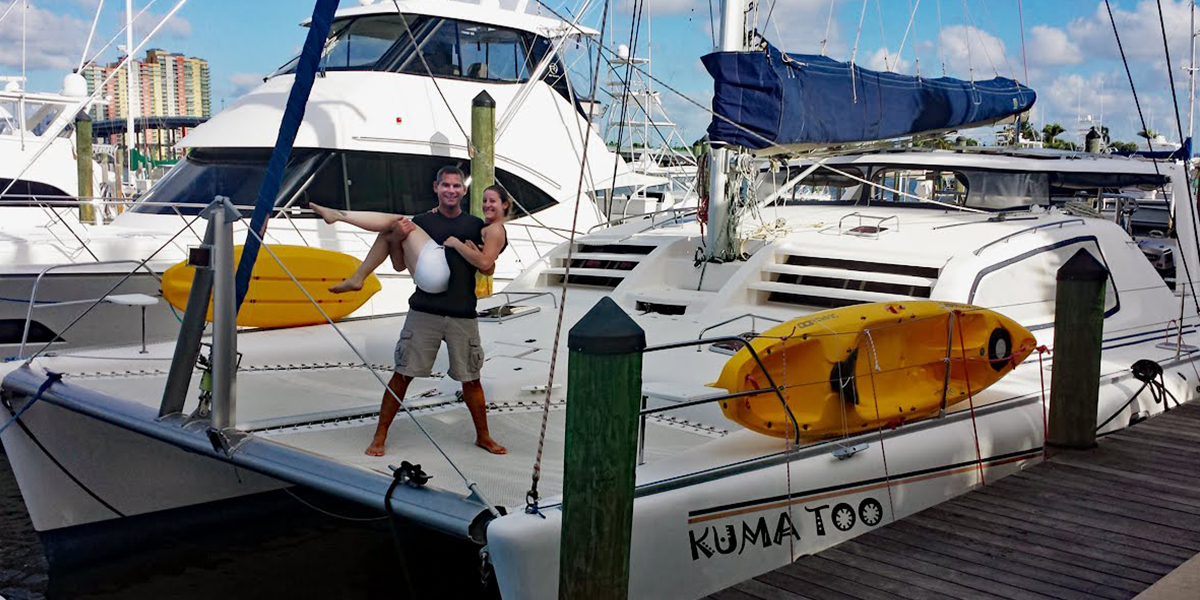 There’s nothing quite like a Category 5 hurricane to remind you what’s important in life.

For Mandy and Joe Rosello, that reminder came in 2017 when Hurricane Irma barreled into Florida, leaving behind a path of destruction that nearly claimed their 47’ Leopard Catamaran, Kuma Too.

“Most people, they look at boats like, ‘Okay, its resin. It's epoxy. It's fiberglass. It's wood. It's all these multiple parts. It's not a living, breathing thing,’” explains Joe. “Yes, you're right, but it's hard not to get attached to something that you put your life into.”

"Our vessel is going to take care of us when we're away from land and in this raging thing called the sea.”

In 2017, Hurricane Irma became the strongest hurricane to make landfall in the continental United States in more than ten years. Following Irma’s passage over the Tampa Bay area and as soon as the roads had reopened, Mandy and Joe pulled up to Kuma’s marina to find their beloved boat sitting calmly in its slip.

“I just remember coming around the corner and seeing Kuma sitting there exactly how we left it,” recalls Joe. “We had no idea the beating that it just took but we knew that everything was fine on it. It looked like it got a bath. There was nothing wrong with it.”

“It really brought it home to me too what this boat was capable of,” adds Mandy. 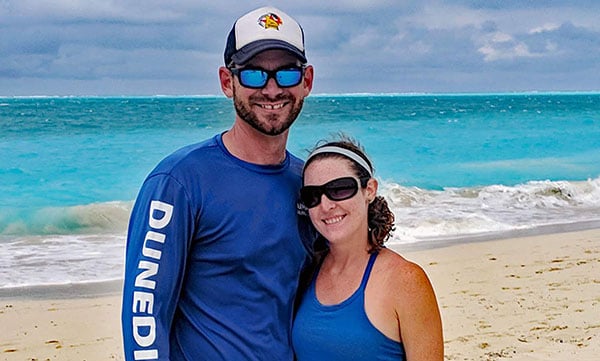 Mandy and Joe’s life on the water began fifteen years ago at an airport, of all places. The two both worked at the St. Pete/Clearwater airport, and they met while crossing paths on Mandy’s first day on the job. They bonded over a shared love of travel, of getting to and being in new and far-flung places. Above all, though, they loved when their travel intersected with their other shared passion, water.

“My dad and I started scuba diving when I was a teenager. That's when I started coming to the Caribbean,” explains Mandy who grew up in Pittsburgh. “I think my first visit down here was 2002, and that's when I got hooked on the ocean and the water.”

When he met Mandy, Joe had just experienced his first time in the Caribbean while on a cruise with his brother.

The two hit it off, and they soon found themselves asking each other the same question, “How do we get back to the pretty blue water?”

Thankfully, from their home in Florida, it was easy to hop on a plane or a cruise ship where they could go diving at every port. Scuba diving became their first passion -- if you don’t count travel.

“We live in a beautiful destination that's a vacation for most people,” adds Mandy. “It’s easy to forget that sometimes.”

The couple’s adventures on the water were only just beginning. From there, the couple began sailing monohulls and took up club racing. Sailing took them all over the Caribbean and club racing introduced them to a whole new world of partnership and exploration on the water.

“We worked in our corporate jobs, constantly waiting for the next vacation,” says Mandy.  “Every time we got back from a vacation, we said, ‘We want to move there.’”

Then, on one particularly fateful vacation, everything changed when they struck up a conversation with a friendly sailor while in the British Virgin Islands.

“We were on the beach, and just started talking,” recalls Mandy. “He was chartering his boat and making money off of it. When we got home, we started googling. Then we started crunching the numbers.”

“This was something that we could actually make work.”

That was June 2015. By February, the couple had sold their home in Florida and most of their possessions. Working with a broker, they found the boat of their dreams that was compatible with a charter set up, which they began studying.

“We really wanted to find a way to make this work. We love being on the water, and we love traveling. How do we put all that together?” Joe recalls asking.

“We ended up with a 2005 Leopard, which we absolutely love,” says Mandy. “For years we had been talking about where we can move to and how can we continue to see the world and make it part of our life. Once we met somebody that was doing it by boat, it all made sense.”

The 56-hour journey to bring the new boat home would be the longest sail for either of them. On top of that, it was their first time sailing a Catamaran. Unfazed, the couple set sail.

“I was way calmer than I would've expected. It was just easy. It felt like home once we were on our way,” recalls Mandy. “The most interesting part to me is that I never felt far away. I never felt alone. I never felt secluded because you have absolutely everything that you need on-board.”

With Joe’s mechanical background, every day on the water became a new opportunity to learn more about how his home and his business functioned.

“Here's this complex machine that is now going to become our home. It's going to be our livelihood,” adds Joe. “I was always trying to educate myself on things and there were a lot of resources to get into and a lot of people to help you out.”

One year later, while Florida braced for Irma’s fierce winds and surges, Mandy and Joe discovered the true depths of their appreciation for their 47’ Leopard Catamaran. The adventures that Kuma promised were still taking shape, and they longed for more than just a year with it. It crushed them to leave the boat to fend for itself during the storm.

But fend for itself Kuma did. 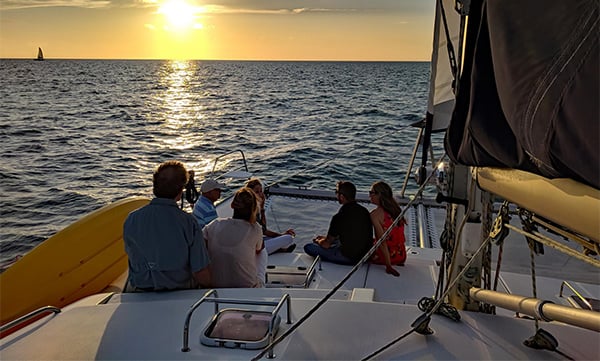 Now, more than two years later, and Mandy and Joe have undertaken new adventures chartering Kuma, first, off the coast of Florida, and then through the Caribbean. Going full time in Kuma meant leaving their day jobs and committing to the charter lifestyle. Joe says he’s never slept better in his life.

Running a business and a home aboard their complex, fiberglass, not-breathing-but-definitely-life-giving 47’ Leopard Catamaran they call Kuma, has given Joe and Mandy the freedom to travel they’ve always craved.

“Most people ask us, ‘What's after this?’" explains Mandy. “We didn't buy this boat to think what's after. We bought this boat to travel the world. We just want to do this as long as we can.”

It took Mandy and Joe two years to return to the British Virgin Isles and the Tortola beach where the direction of their lives took its unexpected turn.

After three days with no sightings, hundreds of miles out into the Atlantic, Kuma, Mandy, and Joe were joined by a pod of dolphins that stretched as far as the eye could see. Their welcome party escorted them for an hour, leaving them only as they pulled into Cane Garden Bay, where customs officials, old friends, and a rainbow awaited their return.