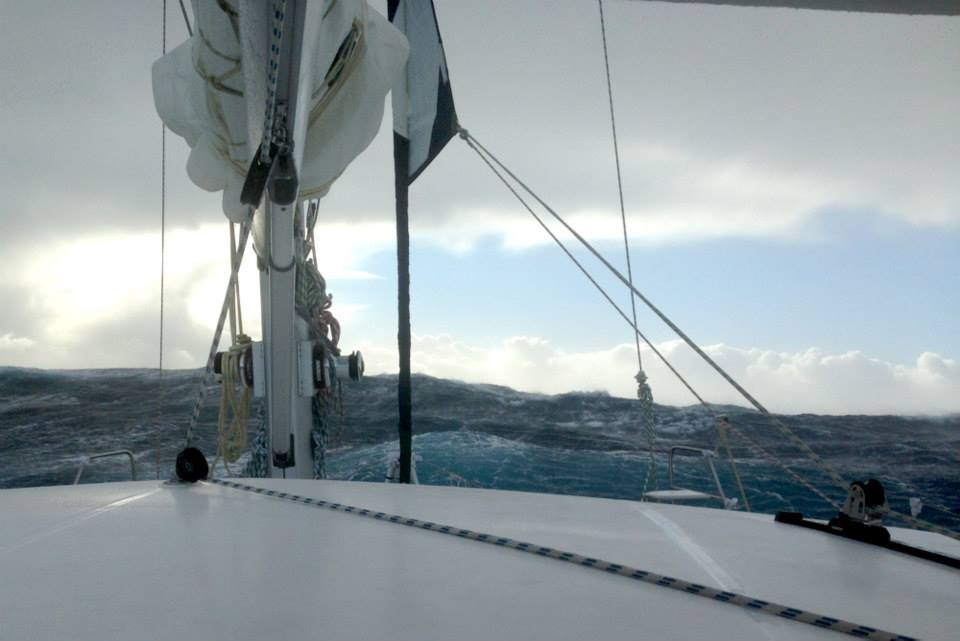 A good skipper and a good boat are not phased by challenging conditions!

Skipper Kenneth H. has 36 Atlantic crossings under his belt. He was more than prepared to take on the Southern Ocean, completing a Leopard 39 delivery from Cape Town to Brisbane in dramatic conditions without any drama. The Leopard Australia team was on the dock to welcome Kenneth and crew...and to get some details about the delivery.

Q: Have you ever sailed the Southern Ocean before?

A: No, this was the first time for the whole crew, although we have collectively, many thousands of sea miles behind us on other delivery trips into both the Mediterranean, and closer to home, the Caribbean.

Q: What was the distance of the voyage and how long did it take?

A: The trip was approximately 7,100 nm and we followed Latitude 39*S in a zig-zag course depending on conditions at the time and to accommodate the many lows coming through at this time of the year. From start to finish, we were at sea for 55 days and we had provisioned for three more weeks.

Q: Is this the first Leopard 39 that has been delivered to Australia via this route?

A: Yes, as far as we know, we are the first crew to bring a L39 east from Cape Town.

Q: Would you do the trip again?

A: Yes, in a heart-beat. After having spent a lot of time aboard these Catamarans on previous trips, we were confident the yacht would perform well, and with close attention to the weather, we had no reason we could think of, that this trip would be any different.

Q: On average days, how far did you travel?

A: We averaged 130nm a day. This was mostly due to the strong winds encountered during the whole time we were down south and that we sailed with the new owner’s expectations that their yacht would arrive in the same condition as she had left the wharf in Cape Town.

Q: What were the best and worst conditions encountered?

A: Mid ocean, we had a number of lows come through that got down to as low as 968hpa and winds up to 65kts constant with gusts way higher. Not a lot of best conditions encountered apart from much later in the trip coming up the east coast of Australia.

Q: How did you steady the yacht in the big blows?

A: By sending out about 50m of anchor line with a couple of large knots at the end of the line, in winds of over 40kts. This steadied the boat while surfing waves but allowed her to move freely if we needed to take control. The auto-pilot was brilliant for all conditions but we always hand steered during the roughest conditions as a matter of safety.

Q: Did you bring extra sails for the trip?

A: Yes, we had a Number 2 Genoa that we set up on a soft fore-stay. We used this sail a lot coming of the back of the low pressures and when the seas were too big for the Genoa. The spinnaker didn’t see a lot of use until we turned the corner to head north. Also carried a storm sail as a back-up.

Q: How did you do your watches?

A: There was always a crew member at the helm at all times and we worked a three hour on watch system. Carolina and Liam knew to wake me if there was anything that they weren’t comfortable with but fortunately they handled their watches very professionally.

Q: Were you receiving forecasts?

A: Yes we used the Sat-phone to down-load GRIB files every five days. We found these to be very accurate even out in mid-ocean.

Q: Did you take extra fuel and water?

A: Provisioning for a trip such as this was a big project. Firstly we loaded 850lts of diesel aboard into both the yachts tanks, and plastic drums situated in the big deck lockers forward. On arrival we had roughly 100lts left in drums and half full tanks. Water was an unknown so we took aboard 1,200lts. We thought we should be able to supplement this by catching water but due to the wind when it rained this was not possible without contaminating with salt spray. By the end of the trip we still had plenty left and I take my hat off to the crew for limiting their fresh water use to drinking, cooking and thankfully, personal hygiene. From past experience we had a lot a lot of dried food and loaded up on tinned food to supplement and fresh fish caught along the way. Not a lot of fish were caught due to the conditions but enough to give us a break from usual fare. We baked bread regularly as well.

Q: Finally, Kenneth, how would you rate the yacht and the crew?

A: This one is an easy one for me as the skipper. I would happily take on the same trip again with both the same crew and the Leopard 39. The crew did everything I asked of them, and more, so this made my job as captain, to deliver the boat over to Australia in show-room condition, much easier. They worked as a team, even in the roughest of conditions (and there were plenty of these) and I would highly recommend them to anyone considering the same journey. The Leopard 39 did a great job of delivering us safely across one of the world’s most notorious oceans, at a time of the year when conditions can be at their worst. What more can I say, than I am proud to have been chosen to undertake the delivery and that the company had the faith in both the yachts abilities and also mine to send me on this trip. Bring on the next one I say!!!!!

Like skipper's reports? Read our interview with Kirsten! She took a Leopard 44 from Cape Town to Sydney this summer.