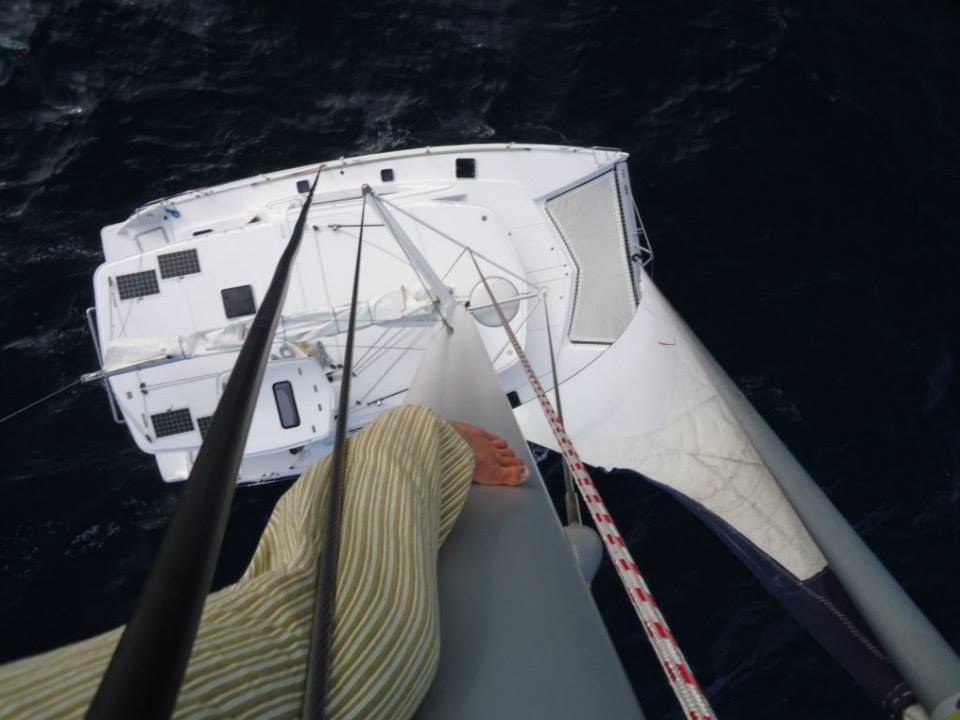 Earlier this month, skipper Kirsten N. tied up to a dock in Australia after 56 days at sea. She had just completed her task of safely delivering a Leopard 44 from Robertson & Caine's factory in South Africa to the boat's buyer in Sydney. Consider this: 56 days means Kirsten and her crew spent about 15% of 2013 on this one job!

Kirsten gives us a good look into life at sea in this Q&A session about the delivery.

Q: How many crew did you have aboard?

Q: What kind of watch schedule did you maintain?

Q: How do you pass the time during nearly two months at sea?

A: Cleanliness of the boat – keeping it clean and salt-free and general checks at sea, engine maintenance etc. takes up a couple of hours each day – then the domestic duties taken in turn – such as cooking/doing the dishes - the watches, of course, and general sailing, which often requires sail changes etc., studying the weather and the charts – and for the rest, reading plenty of books, playing cards, philosophizing with the ship’s mates, taking a swim around the boat on a calm day, getting enough sleep and rest to be in healthy shape.

Q: How did the boat handle?

A: The boat took the seas really well. With each approaching depression, we would get strong Northwesterlies: we would fall off with the wind and take the seas and winds on the quarter and go further South, until the wind would back round to the Southwest, and we would head back to North on the other tack, still keeping the weather on the quarter. This would allow the boat to run with only the genoa, which meant that the sail was easy and safe to reef, but allowed for good progress, none the less. The auto-pilot steered the boat with ease, and the helm was balanced. Even when the boat took occasional big beam seas, it felt stable.

Q: Did you have to make any repairs underway?

A: No repairs were needed underway. I climbed up the mast once while we were becalmed, to check the rig – forestay and cap-shrouds – and found everything to be as it should. We tightened up slightly on the cap shrouds. In very strong winds, we would tag down tightly the genoa with the lazy sheet on the weather amidships cleat, and tightened up on the topping lift and then main sheet (even without the main being hoisted) to give the rig additional “backstay” support, and we experienced NO breakage.

Q: What were the highest wind speeds and wave heights that you saw? What was the prevailing wind direction?

A: We had true wind speeds gusting into the lower 70s, but between 50-60 was frequent,  from NW’lies to SW’lies, hence we would keep the weather on the quarter, and keep apparent wind speeds down. But usually the depressions would not last for more than 24 hours, so the seas would only pick up to 5-7 m, mostly a more or less comfortable, long period swell, which would push the boat along nicely, giving us some surf speeds up to 18 knots on the odd occasion. After the passing of a depression we would sometimes be becalmed slightly for a day or two, giving the sea a good chance to subside again.

Q: What kind of air temperatures did you experience?

Q: How much fuel did you use?

Q: What did you see? Any notable encounters with other boats, fish, birds, etc.?

A: Endless amounts of albatross, black boobies and other sea-birds. We had our encounters with the fish we hauled in on the line and made dinner out of. We saw dolphins off the coastlines (SA and AUS), we saw seals off St. Paul and wales in Oberon Bay and off Jervis Bay. We saw some small fishing boats between St. Paul and AUS, with bright lights like calamari boats – often just drifting, but other than that it was a very desolate stretch – we saw very, very few cargo ships and went for weeks without seeing anything at all.

Q: Anything else about the trip you want to share?

A: On a whole, a very cold, rainy stretch. Sea temp between 14-16°C made for cold swims around the boat on a windless day, and cold dragging behind the boat for a salty “shower”. There were some sea-mounts along the crossing – shallow areas, which we did make sure to avoid, but even passing 40 miles of them, a change of motion could be felt. We caught a good glimpse of the volcanic crater of St. Paul – a rare and beautiful sight – and a privilege, that the Leopard 44 carried us all the way there and safely across the ocean. On a whole, we were lucky with weather, the Indian can be a lot more treacherous, but I had good confidence at all times in the solidity and capabilities of the Leopard 44.

The Leopard Catamarans facebook page has an album of Kirsten's photos from the delivery.

Kirsten N. is a native of South Africa and typically skippers at least two longer ocean-crossing deliveries each year, as well as a number a shorter coastal trips.