Cape Town to Brazil on a Leopard 48 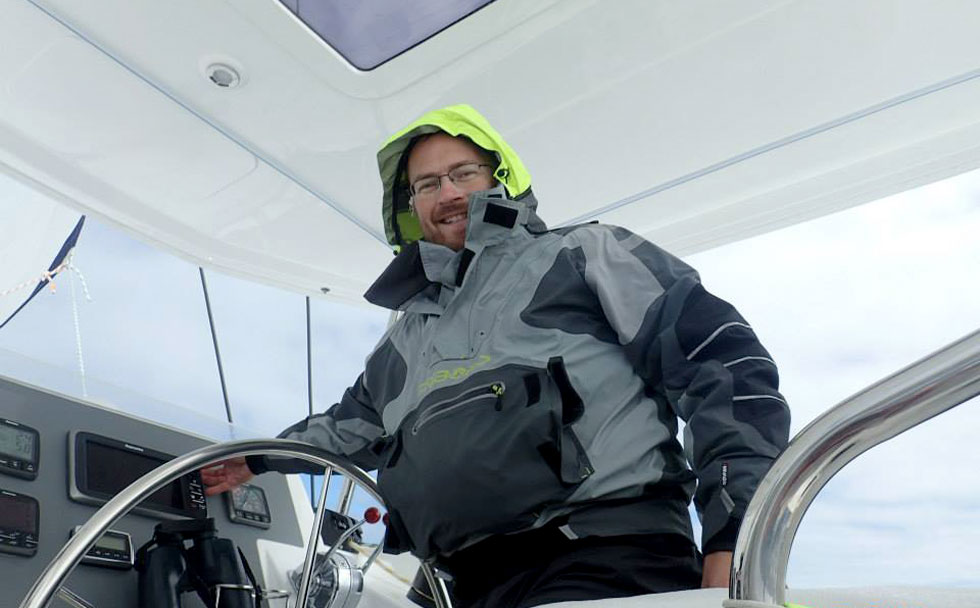 Arnaud Savignat, Leopard European Sales Manager, took a month away from the office this winter to get to know his product even better. Arnaud, who is in his 6th year working for Leopard Catamarans in Nice, joined a delivery crew aboard a Leopard 48 (as a Moorings 4800) from Cape Town to Santos, Brazil this winter.

Arnaud has been sailing since age 5, with a heavy background in dinghy sailing and windsurfing as a kid which translated into J80 racing as an adult. He's been to 3 National championships, 1 European championship, and 1 World championship with the sporty, competitive fleet.

Cruising is far from foreign to Arnaud, though. Growing up he would cruise with his family along the coast of Brittany for one or two weeks each year. And later on, he gained more time at sea on delivieries in the middle east such as Jordan to Egypt and Abu Dhabi to Doha on 60'-70' sailboats. Still, Arnaud's longest time at sea prior to going on this trip was 3 days.

The stats for this trip aboard the Leopard 48

Some Insights from Arnaud

One of Arnaud's goals on this delivery was to practice celestial navigation. "I learned it when I was 11 years old, with a friend of my dad's, and then forgot almost everything. I thought this was the perfect time to go back to it," he explains. "It's practically useless today but intellectually interesting and exciting to try to understand what it was like to navigate centuries ago." So how did it go? "My measurements at the end were good but I did not take a course prior to leaving to review how to do the calculations. I let my iPad do them! For sure, next time I go to sea I will take a good course." And there will be a next time, as Arnaud has his sights set on more ocean crossings, specifically a pacific crossing with a Panama Canal transit.

When asked what made the biggest impression on him on the trip, Arnaud replied, "Peacefulness. You are totally stuck in time, nothing religious but I would compare it to a pilgrimage or time in a monastery- you are out of the world, you can think and dream for hours with a minimum of physical and social activity just to avoid craziness."

And what about the boat? "The boat is amazing, upwind was where I was most impressed, maintaining speed even in bad seas. That was the real pleasure, also because of the pride I felt being part of the company."

During the trip, Arnaud reported back to us by email whenever he could using the boat's satellite internet. A compilation of his reports is below.

All well on board the 48, we are starting our 3rd day at sea. We left Cape Town at midday on the 16th.  Weather is now cool, 10/15 knots SE breeze, more comfortable than the first 2 days, where it was bloody cold and windy, from 20 to 30 knots apparent wind cruising between 8 and 10 knots (with surf at 13/14). This boat is fast if you consider we were doing those speeds while in "delivery mode" so always one more reef or a few more turns on the jib than recommended.

We are all getting used to our new life at sea, our routines and roles coming fast (had to considering the weather when we left). No one was ready to cook so it was only snacks for the beginning and we had the first dinner all together yesterday evening.

This is now the fifth day that we are at sea. The weather is beautiful- southeast wind 12/15 knots. We’re flying the gennaker alone (more comfortable downwind). Yesterday was really busy, when I woke up they were just getting on board a huge tuna. It measured at 30 kg according to the electronic scale. I figured out this was a mistake, the tuna is big but this was not 30 kg but 30lb.

Edouard has been working on sushi all afternoon and I have been trying to find out where we are with the sextant. The sushi was fantastic but according to my measurements we are about 300 nautical miles from the cost of Angola!!!!
Will keep practicing.

It is now a week since we left cape town for Santos. We got the "bad news" during my watch (3am to 6am) today, the weather is not for sailors out there! We don't see any favorable option to sail in front of us until probably the end of the week, so we decided to cut to the chase and take a direct course to Santos, due west.

We are hoping that the low pressure system coming from the south will pass quickly and we’ll get some wind from the high we see on the grib files. Other than that, all good on board, the mood is as high as the pressure! The baker (Elene) and the chef (Edouard) among us are doing their best.

Always fantastic to be at sea.

Today after the engine maintenance we took a Christmas break, stopped the boat and went swimming for a while. The wind expected at the end of the week will most likely materialize, so this is probably the end of the power cruising....

The weather is getting better than the last 3 days, where we have been sailing upwind in 20 knots with some showers. We are still not on a direct course for Santos as we’re turning around a low pressure system.

It's been some time since I e-mailed as I was not feeling in the mood while flying above the waves at 8 knots (incredible how fast this boat is, even up wind).

The crew is doing well, we caught a dorado and made a fantastic dinner of it! I am improving my sextant measurement, but still officially lost!

It has now been 3 weeks since we left Cape Town! Time is flying, we don't see it passing.

All is well on board, we had some "sporty days" last week- flying upwind, the boat sailing incredibly fast. As a result, we’ve limited our activities on board (that said Edouard managed to cook some good dinners).

We now have been sailing downwind under gennaker only for two days and will possibly continue one more. Then we will head to Santos upwind in an expected 20 knots of wind.

It’s hard to believe that this is already our last week, even more difficult for me as I have to think about buying my ticket back to Europe while boat and crew will keep going, after few rest days in Brazil, to French Polynesia!

View Arnaud's photo album from the trip on facebook