Cape Town to Brazil on a Leopard 43 PC 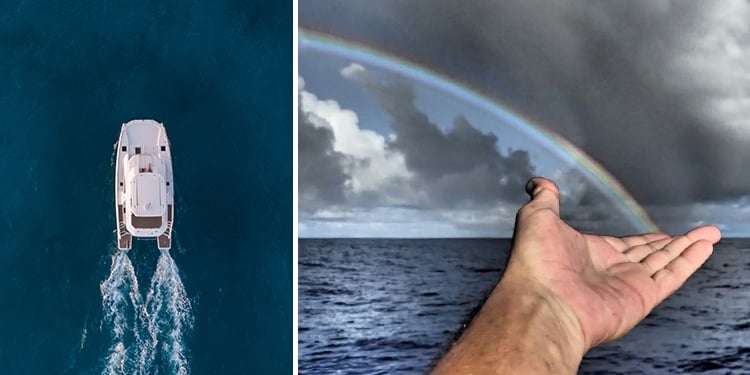 Whether it is your first time or your one-hundredth time, completing a voyage across the Atlantic is always an accomplishment. Losing site of land can be terrifying yet exciting at the same time. It is the thrill of the unknown.  Anything could go wrong, but everything could go right.

Now picture this, completing an Atlantic crossing on a boat model that has never made this passage. If you are the captain of this vessel, wouldn't that make you a pioneer? Captain Mike has been delivering Leopard Catamarans for years. In fact, he has delivered nearly every model of Leopard Sailing Catamaran to have come out of the Robertson & Caine factory in Cape Town.  What he has not done, however, is deliver a power catamaran across an ocean. As he states, "This was my first trans-ocean delivery with a power cat, and I was impressed. She handled the seas very well, better than I had expected. Also, the fuel range for long distance was really good."

The yacht being delivered is a Leopard 43 Powercat. She comes in at 42.8 ft in length with a beam 22 ft, and is equipped with dual 320 hp Yanmar engines and a fuel capacity of almost 1,000 liters.  The Leopard 43 Powercat was destined to cross an ocean one day, and her day finally came.

Fuel is the most important factor that comes into play when considering crossing in a powercat. Is there an opportunity to stop somewhere to refuel along the way? Yes, there is. But if there is not, could the passage still be accomplished? Yes, but Captain Mike explains, “I have done the math and it is possible. But you have to look at what the boat can handle in the worst case scenario. So while it is mathematically possible, I would never advise it.” And if you don’t have to risk it, why would you?

With a crew of three, the departure was from Cape Town, South Africa on May 19, 2018. The journey began on May 19th. Heading northwest the crew touched down for a stopover on St. Helena on May 31, 2018; one of the most remote islands in the world. Situated in the middle of the South Atlantic at 16° S, 5.7°, this island is the location Napoleon Bonaparte was exiled to by the British in 1815. It is a popular stopping point for delivery crews making the journey to or from Cape Town across the Atlantic. However, being a faraway land, you can imagine everything comes at a price. In fact St. Helena just may have the most expensive WiFi in the world at £13 per minute! But logistics aside, she is a charming island with 4,500 hospitable locals.

After an overnight in St. Helena to shake out the sea legs and restock on fuel, the team headed west. The final destination was Vitoria, Brazil where the crew landed on June 15, 2018. The entire delivery took the crew 27 days—some days more eventful than others, but more on that later. The Leopard 43 Powercat covered a total of 3,750 nautical miles during the almost four-week excursion.

Naturally, anyone reading this will want to know what the fuel consumption was during the trip. And how did they do it? The method for delivering a motor yacht a long distance is simple- take it slow! Conservation of fuel is the name of the game. To be realistic, if Captain Mike was flying open throttle from point A to point B there is simply no way the yacht would make it 3,705 nautical miles. But with proper fuel planning and strategy, along with a highly efficient Leopard Power Catamaran, it can be done.

The Leopard 43 Powercat departed from Cape Town with 1,000 liters in the tanks and 2,000 liters in plastic fuel drums. The fuel drums take up quite a bit of space on the vessel, but it is an important measure one must take for peace of mind. When the crew arrived in St. Helena they took on 600 more liters of fuel. The average speed of the yacht was 6.2 knots with an average fuel consumption of 1 liter per nautical mile. The beauty of a catamaran delivery is that you have the security of dual engines should anything at all go awry. The tactic for this trip, as with most long distance power cat deliveries, is to run on one engine at a time.

The total fuel consumption for the entire trip was 3,400 liters. As mentioned previously, the yacht traveled 3,705 nm. If you are doing the math in your head, then you will note that she actually performed better than her reported average of 1 ltr/nm.

Leave it up to the weather gods

Rough weather and poor seas can make a trip a lot more difficult; which is why waiting for your weather window is a necessary practice for ocean deliveries.

For this delivery, the crew monitored the weather reports twice a week or more, depending on weather conditions, by using a satellite phone with SMS texting. Some of the roughest seas that were endured were 10 foot side swells with 25 knots of wind. According to the crew, the yacht handled extremely well. And while she did not take too hard of a beating, it was not exactly smooth cruising the entire way either.  The average seas for the delivery were 7 feet, with average wind speeds of 12-17 knots north-northwest. The longest streak of calm days on the water was five. Then there were occasional moments where the boat was cruising on glass. During the days of calm the crew was able to take advantage and enjoy the flybridge. While the helm is positioned on the flybridge to starboard there is also plenty of seating space to stretch out while not on watch. Fortunately, for the days when the weather did not cooperate, the yacht was equipped with indoor throttles and autopilot at the chart table—this proved to be a valuable option.

What about the boat?

After living aboard the Leopard 43 Powercat for an extended period of time, I couldn't wait to find out how the delivery crew felt about the boat. As mentioned previously, the captain was pleased with the way in which she handled. In fact, the yacht exceed expectations.  And what were some of the favorite features? "Keeping the forward door open allowed for excellent airflow and of course the flybridge is great," Mike confesses. I can imagine the flybridge of a power cat is quite a nice feature for Captain Mike when you consider that he has spent his career delivering sailing catamarans. And what was his favorite item on board? “The WiFi hard drive was the handiest item we had on board, I enjoyed having it especially during down time.”

Of course no Atlantic crossing would be complete without trolling. Luckily the team caught some fresh fish during their time aboard. Dorado, Tuna and Yellowtail were the indulgences of the journey which was served up both grilled and as sushi.

While the journey for the delivery crew is now over, for the owners of this new yacht, the journey is just beginning. As of July 18th "The Kimnara" was officially the first Leopard 43 PC to not only cross the Atlantic, but also the first to be handed over in South America. To discover pricing, options and availability on a Leopard 43 PC, click the button below to build your boat.