Blog > Behind the Scenes in Bimini, Bahamas

Behind the Scenes in Bimini, Bahamas 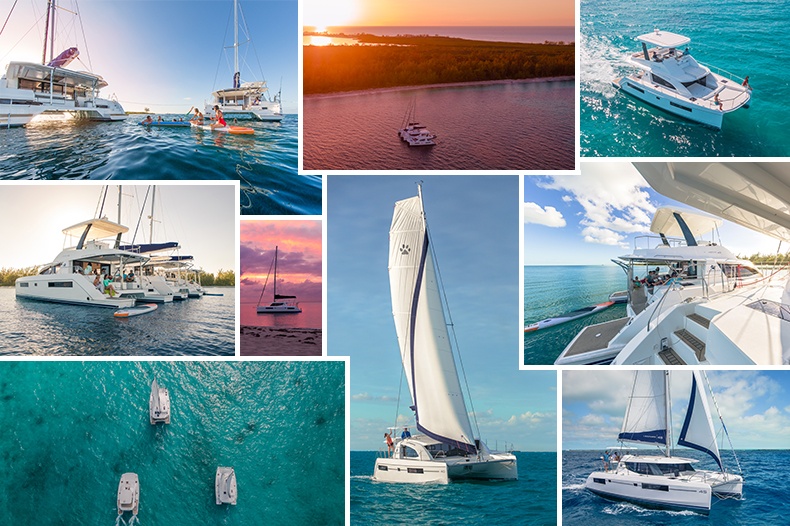 Have you ever wondered how much time and effort goes into getting that perfect shot? The shot that can bring our yachts to life in a single image. Well, for starters, you can’t go wrong with catamarans in a post-card paradise.

Leopard Catamarans just recently did a shoot in Bimini, Bahamas with the three newest members of our catamaran family. Early mornings and long days are all a part of the job, but when you are surrounded by a turquoise paradise on a gorgeous new catamaran, the lines between work and play can get blurred. For the production crew, it was certainly more work than play, but the idea behind this shoot was for the photography crew to stand by and let the perfect shots unfold naturally.

We spent three days shooting, plus a day reserved on the front and back end for travel. For details on the full itinerary of our Leopard Catamaran photoshoot, keep reading!

From our South Florida office at Harbour Towne Marina our boats were loaded with provisions and we were ready to set sail for Bimini. It was important to gear up for all the supplies that we would need in Florida, because once you arrive to Bimini your options for groceries are limited. Luckily we had crew members who are no novices to vacationing in Bimini and therefore provided not only a wealth of knowledge prior to departure, they also had plenty of local knowledge about Bimini, which is how we ended up in the most beautiful anchorages that the islands have to offer.

Roughly half of the team that was participating in this production had gone directly from working the Miami Boat Show to Bimini, the other half of the team had traveled from South Africa to South Florida, so upon arrival to the Bahamas, other than a chat over the outline of the plan for the next 3 days, the team was able to take a breather, have a cocktail and rest up for three full days of sailing, swimming, snorkeling and SUPing—all important components of a lifestyle photoshoot for cruising catamarans.

The weather was shifty, but as the day progressed beautiful moments began to unfold. While anchored in Honeymoon Harbour we had an epic encounter with Sting Rays. Thank goodness for drones as we could not have caught the magic of this moment without one. Our model/ first mate was deemed the “String Ray Whisperer”, as the footage reveals a small school staying close, but not too close,  just long enough for us to capture a pretty cool moment.

Day 3 – Quality Time with the Pack

Sister ships the Leopard 40, the Leopard 45 and the Leopard 43PC had an action packed day on the water! We felt extremely lucky to see these yachts cruising side by side, and all gave a great performance for their Bimini debut.  The skippers of all three vessels were seasoned sailors and knew how to move these yachts, and thus provided a smooth day on the water and a lot of great content.  In addition to great captains leading the pack, the production crew has spent a lot of time on Leopard Catamarans and this also played a vital role in the efficiency of this shoot as they certainly knew their way around our yachts.

Once the crew was confident that we got the perfect family portraits, it was time to drop anchor on the east end of Gun Cay. As a group effort, we were able to arrange the anchored yachts into a triangle formation with all sterns facing each other. This created an excellent space for snorkeling, paddle boarding, swimming and socializing. It was an easy shoot because the chemistry of the group was fantastic and we had plenty of coronas to pass the time!

While the shoot was going on, we had a team member volunteer to dinghy ashore to collect some firewood for a bon fire on the beach at sunset. This scene made for the perfect setting with the yachts anchored behind everyone at dusk. It was a photographer’s dream come true.

As the sun was setting, we could relax, as we felt that we had accomplished a lot on this long day. Little did we know the production crew had yet to reveal the plan for tomorrow’s shoot…

The team had big plans to get the Leopard 43 PC in action just as the sun started to show her face on Friday morning. And while the 5:30am wakeup calls seems unnecessary, once you are out on the calm seas first thing in the morning on the Leopard 43 PC going full throttle it all starts to make sense. Everyone started this day with a good outlook and as the sun got higher, the day got better. Once we wrapped up with the powercat performance shoot, all three yachts headed over to the Sapona Wreck and dropped anchor. Sapona is/was a concrete cargo steamer that ran aground near Bimini during a hurricane in 1926 and the wreck is still visible above water.

The weather here would not make up its mind so we were in a limbo for a while before we got the shots we needed and decided to move onto our next post up in paradise. We landed on a slice of heaven in North Bimini that is unofficially referred to as Blue Lagoon Beach. While here, we rafted up the three yachts, busted out the drones and cameras, jumped in the water and had some fun.

We wrapped up the lifestyle shots that were planned for the day fairly early, so for a few hours everyone was free to relax. However, every moment of relaxation seemed to also be the perfect photo op!

We did some behind the scenes work, added a splash of color in the aft cockpits and the flybridge and once we landed near time for sunset, the group was asked to socialize and relax on the yachts—rough life! Once the crew was confident that we had captured the evening in a photograph, it was a wrap!

Day 5 – Farewell to the Land of Sapphire Waters

After a debriefing over some coffee it was time to set sail for the hustle and bustle knows as South Florida. The weather was near perfect for the Leopard 40 and the Leopard 45 to put up their sails and cruise back to our home base. All of the yachts were nestled in their South Florida slips at Harbour Towne Marine around 4pm. Once settled for the evening, we were able to say our goodbyes and everyone dispersed to their respective ends of the world over the next few days.

Do you want to see our fleet up close and personal? Then click the button below to sign up for our e-news so you never miss an open house or boat show invitation again.