The Angled Mast Explained:  Why a Bit of Tilt is Straight Up Better 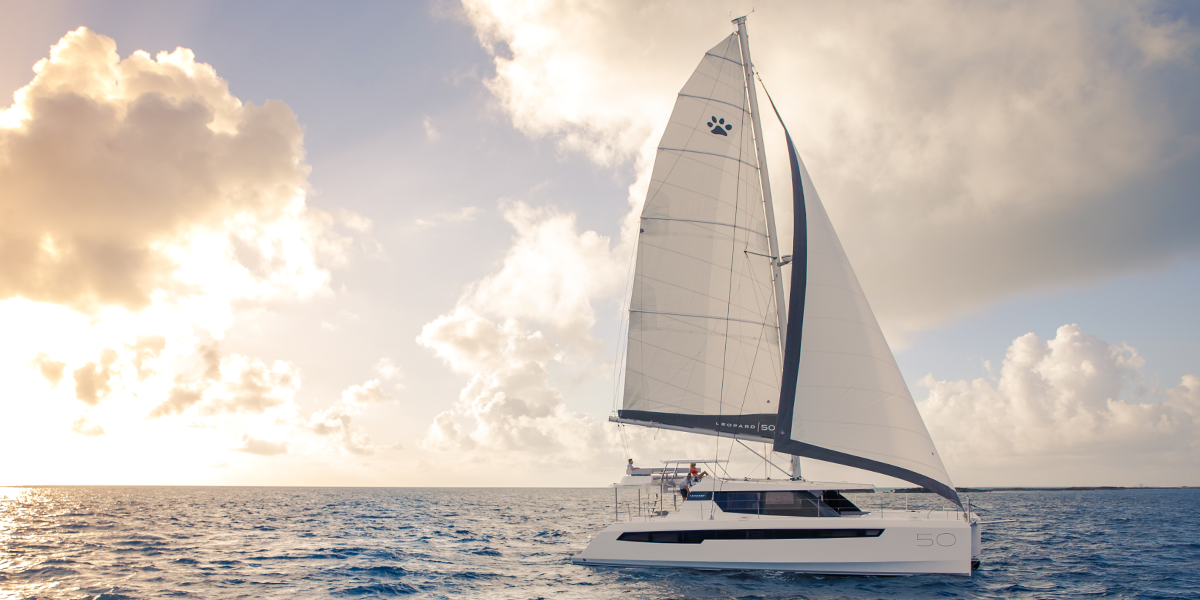 Leopard catamarans are masterpieces of design. Every detail from stem to stern is carefully considered, evaluated and reconsidered before becoming part of the boat’s blueprint.

So why is a Leopard sailing catamaran’s mast tilted aft?  That tilt is known as the rake, and it serves two purposes — improving the boat’s performance and stability in the rig geometry.

Allow our yacht designer to explain...

A raked mast helps smooth the airflow around the sails, which eases your Leopard’s forward motion.

“As you move through the water, you get a lateral airflow over your sails, from the front to the back,” says yacht designer and naval architect Alexander Simonis. “But you also get vortexes at the top and bottom of your sails. This circular flow, these tip vortexes, disturb the airflow and create resistance.”

Vortexes become more common as the flow increases (aka when the wind blows faster) and the air grows more disturbed. Angling the mast reduces the effect of these vortexes, with steeper angles doing the most to reduce their added resistance. That’s why Simonis says, you will see windsurfers riding a brisk wind with their mast pulled back up to 20 degrees, which they do to keep balance, and (perhaps unbeknown to them) significantly reduce the losses caused by these vortexes.

So what's the perfect angle?

Leopard masts are raked less than five degrees off the vertical.

“The research shows that angling the mast back eight degrees is more or less the optimum to minimize the vortex effect you get [on a Leopard],” says Simonis. “We’d like to reach that theoretical maximum, but it’s not practical. Eight degrees doesn't sound like a lot, but if we did that, the tip of the mast would probably be above where the tender sits. We found that we get a lot of benefits with between 3.8 and 4.2 degrees of rake. That's what we do as a standard on these boats.”

That degree of rake also helps better distribute the loads between the forestay and the side stays. Additionally, the Leopard’s rake places the mainsails’ center of effort behind the boat’s center of lateral resistance. The boat is naturally inclined to generate some weather helm with this arrangement, so when you release the wheel, the boat tends to slowly turn into the wind.

Any other purpose for the raked mast?

A raked mast does one other important thing for your Leopard. It makes the boat look even more sleek and cool. How? Experts say… well…it just does. While no one can pinpoint why a raked mast looks good on a boat, everyone agrees it’s aesthetically more pleasing than a straight mast. Nineteenth-century schooners and yachts often had high degrees of rake because the feature was associated with speed. Indeed, the term “rake” for a man who lives a fast and colorful life comes from the sailing term.

Improved performance and good looks. Who knew that four degrees could be such a difference-maker.