A Life of Freedom for Mike and April

Taking the time to focus your attention and finances on the things that matter the most is generally why people choose a minimalist lifestyle. And for Leopard Catamaran Owners, Mike and April, what matters the most to them is spending time together and traveling.

April explains, "I had become a minimalist, and Mike started to embrace it as well. The lifestyle helped us to focus on what we both wanted out of life."

The two lived and worked in Washington D.C.  But what their heart's desire was to travel to new places and learn new cultures. "In 2012, we eloped in New Zealand and spent three weeks there. We loved the ability to travel slow and stay as long as we wanted," April shares.

Doing most work from home, they decided the next step would be to figure out how to travel full-time. That year they took a few significant steps to make this happen, and they were off to Colombia for three months. They visited 13 countries that year, April continues, "We loved traveling slow and fully experiencing a destination aside from the tourist spots. It was a wonderful experience, but we missed having a home.  We kept thinking about sailing because it would allow us to travel while bringing our home along." 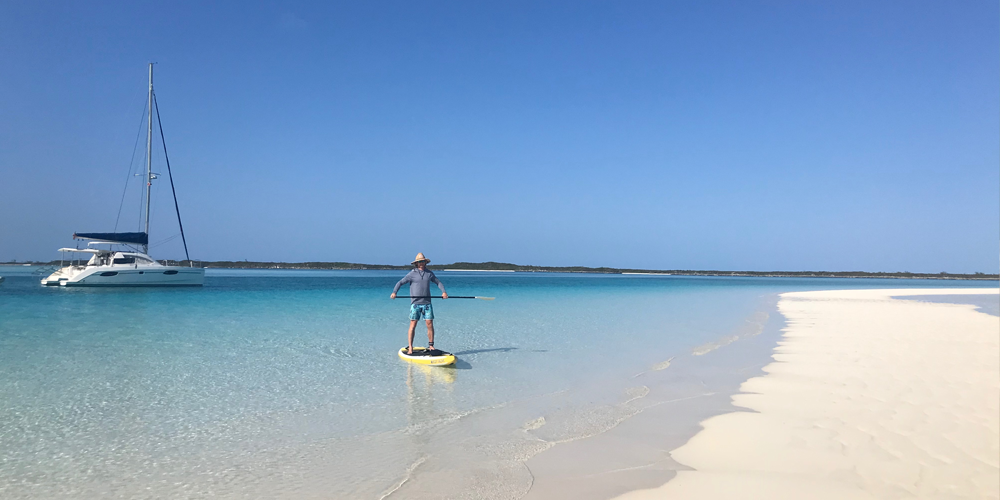 Once the seed was planted, they wasted no time. They were now on a mission!

April shares, "During that time, we took a week-long catamaran live-aboard sailing class in Grenada.  Looking back, the conditions we experienced in Grenada were worse than anything we’ve seen since, but we loved it anyway.  After our sailing course, we flew directly to Miami for the Miami Boat Show, where we fell in love with all the Leopard Catamarans."

After the show, they had their sights set on Leopard Sailing Catamarans. According to the couple, the Leopard 39 seemed to tick all of the boxes. But, as any catamaran buyer knows, patience is key when it comes to finding the perfect vessel. 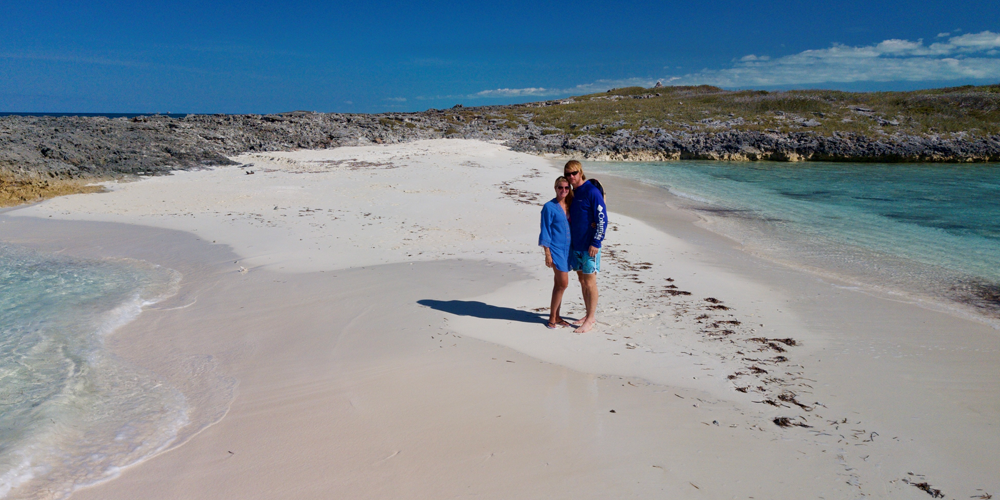 After going home and doing some research, they scoured the internet and decided that Leopard 39 Owners Version was their perfect boat.  Unfortunately, at the time, there weren’t many on the market.  They explain, "We emailed brokers asking them to tell us if anything popped up, and finally, this worked!  As soon as our boat came on the market we made an offer and went to go see her in Marsh Harbour, Bahamas.  As we expected, she was perfect and very well-maintained by the Moorings base there.  As a part of the Moorings Phase Out program, the Moorings fixed every little thing that was identified in the survey and then guided us through all the systems on the boat."

The couple decided that it was a blessing in disguise that they could be close to their boat during the phase-out process. Mike shares, "We were able to spend time onboard seeing how everything works, and how to fix things. We probably asked a million questions." 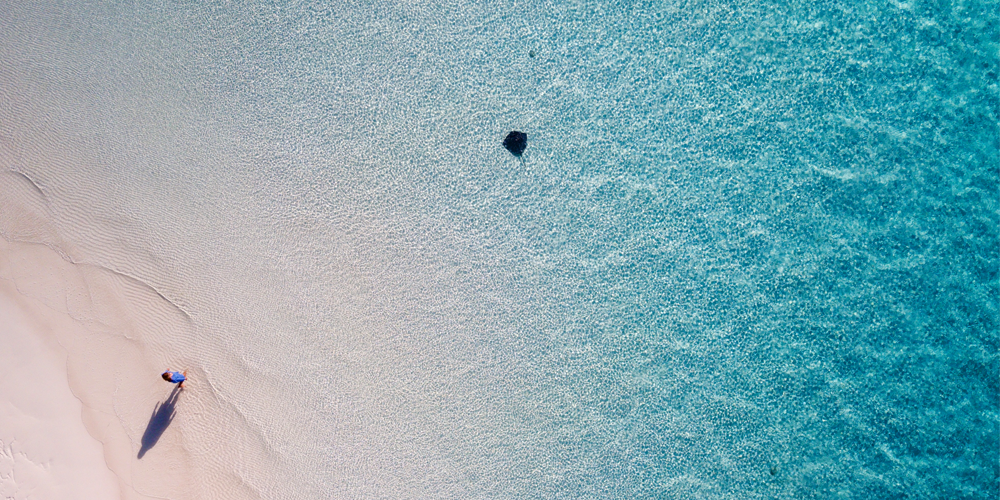 "We knew we were going to live full time, so we wanted to be off the grid as much as possible. So we added a lot of little things and a few big things," Mike reveals.

After finishing the upgrades, they shot over to the Bahamas to enjoy their first cruising season aboard their Leopard Catamaran.

And the couple has experienced a lot in a short amount of time! "Since moving aboard we have spent a lot of time in the Bahamas – spearfishing, kiteboarding, and meeting other fun and like-minded cruisers.  In 2019 Mike was activated with the National Guard in Miami, and we were able to bring our ‘home’ to his assignment. This summer we slowly cruised up the US east coast, visiting friends and family in various places along the way.  We spent an entire month on a mooring in New York City and have now made it all the way to Maine," April shares.

What does it take to live on a boat?

April describes it as pink and blue, "I mostly handle the cooking and the cleaning, and then Mike handles all of the maintenance-- mechanical, engine, electrical, plumbing and he is on water-making duty."

And when it comes to sailing, the jobs are as follows: Mike does the driving, while April drops and raises the anchor, raises the sail and handles the dock lines.  Mike does things that require getting wet, and April does all sail planning, navigation, and local briefs.

Tips for making life easy onboard? April says her instant pot comes in quite handy! In addition to that, the couple was kind enough to provide a list of gear that they use often which has come in quite handy:

And then, of course, living on a boat, there are plenty of safety precautions that you must take to ensure the safety of all crew members. April and Mike's practices are on par with most other sailors. Mike shares, "One safety measure that we do consistently is on a passage at night. The rule is always life jackets and hooked in. And if you're on watch, you can't leave the cockpit unless you wake up the other person."  April then explained that a man overboard is one of her biggest fears, and almost any other boater would agree. 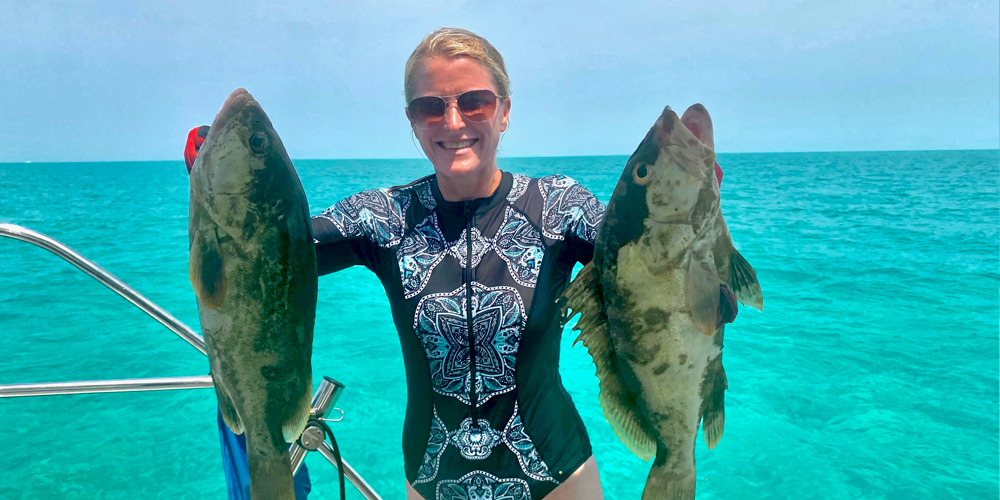 The best part about it

Being a full-time cruiser and minimalist provides so many unique opportunities for those who can appreciate a simplified yet thrilling lifestyle. And everyone has their different reasons. For April and Mike, it's the ability to do what they want, when they want.

"Our favorite part about this whole lifestyle is the freedom. Every day is a different experience and we have access to unlimited travel. If we aren't enjoying something, we can just go somewhere else-- if you don't like where you are, it is as simple as just changing it. We are in Maine right now and there is nothing similar between Maine and the Bahamas. Both places are wonderful, different locations," April continues.

"The best part about not necessarily boat life but this lifestyle, in general, is that we don't have to decide anything ever. We have a general idea of where we'd like to be over the next year or what we'd like to do, but we also are both open to changing our plan and doing something else."

What the future holds

April and Mike don't know what the future holds. But what they do know is that it holds excursions and experiences that can only happen when you are full-time cruising.

April concludes, "Living on Wander has given us exactly the freedom and adventure we had hoped for.  At first, we thought we’d sail around the world.  We still might, but the best part of this life is that we don’t have to make permanent decisions.  We are looking forward to another winter in the Bahamas and haven’t planned much past that. We are full-time cruisers and there is no end in sight."